Is This Too Over the Top for an Atheist? May 12, 2010 Guest Contributor

Is This Too Over the Top for an Atheist?

Doug Stewart lives in Louisiana and he’s wondering if his “godless evangelism” has gone too far.

He’s very proud of being an atheist and he wants to share that with anyone willing to listen. (You might recall how Doug had previously held pro-atheist signs during Mardi Gras.)

This time, Doug is being a little more active about it all. Instead of just waiting for people to come to him, he’s helping facilitate that conversation.

First, his “GODLESS” license plate holder displays his phone number for anyone who would like to contact him to discuss faith: 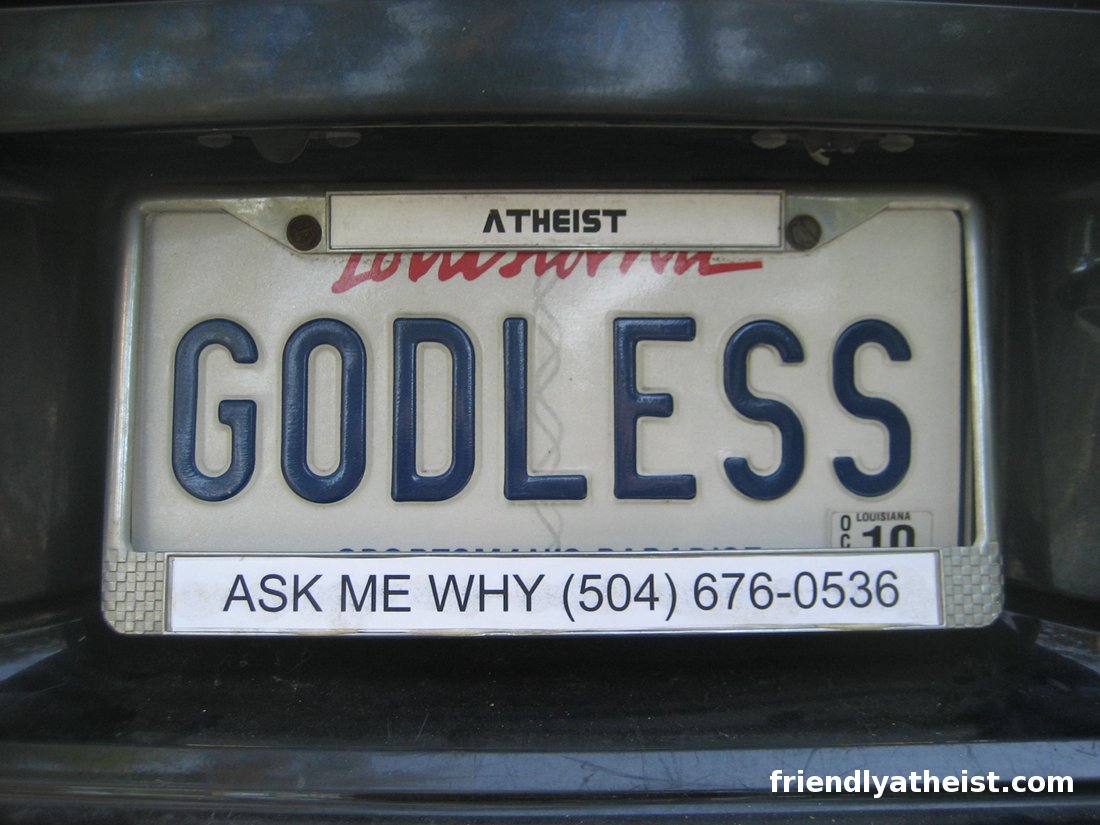 Next, he put a miniature version of an atheist billboard on the roof of his car. It reads “Hello, I’m an Atheist. Do you have any questions for me?” 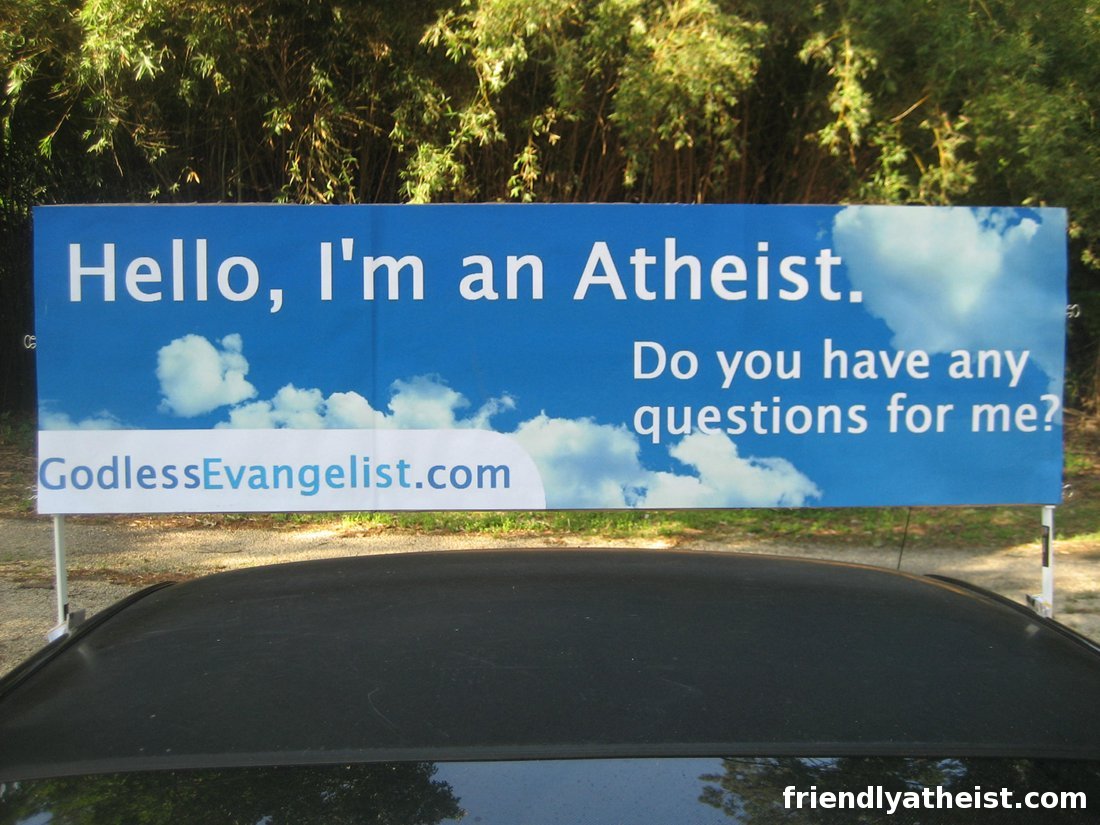 (And you thought a Darwin Fish bumper sticker would attract vandals?!)

Then, he decided to do something more questionable.

He dressed in his “Sunday best” and parked his car (legally) near churches so that parishioners leaving the service could get a glimpse of him — and hopefully engage him in conversation. He tried to be as polite as possible about it. In fact, before appearing at a local Catholic church, he emailed the priest to inform him what he was doing:

I’m an atheist. www.godlessevangelist.com. I’d like to give the people that visit your church the opportunity to hear the alternate point of view.

I’m planning on standing outside your church after Sunday mass with a sign that says, “Hello, I’m an Atheist. Do you have any questions for me?” I also have some business cards with contact information and tracts to hand out to anyone that would take them.

I’d like to ask your advice on where I can stand and park my car so I’m not seeming too assertive or violating any laws.

If you would like to meet me prior to the event, please don’t hesitate to ask.

He got a response fairly quickly:

I have received your e-mail. You are not welcome to be on the church property for the purposes of handing out literature or espousing your views.

For what it’s worth, Doug had no intention of being on church property. But still, should he have gone there at all?

Doug parked a safe distance away and waited for people to exit the church:

I was acknowledged by, I would guess, the majority of people leaving. Some honked their horns; some slowed down to stare at me and did the sign of the cross on their bodies; and some just waved. I didn’t witness any angry behavior… And then the priests came out.

They told Doug they wanted him to leave. Doug told them he was concerned about the power of religion in the country, implying that he wasn’t about to move. One priest said Doug was “causing an obstruction” and Doug offered to move his car a short distance away (but still close enough to the church).

The priests reiterated that they just wanted Doug to go away.

So the priests called the cops. Here’s Doug recollection of what happened:

The police car came almost immediately. The officer asked me to stay with my car and spoke to the church officials first. He was with them for about 10 to 15 minutes… Then all the church officials returned to the church, and the police officer, who was very congenial and understanding explained to me that even though I wasn’t causing an obstruction, the hard shoulder was reserved for broken down vehicles and I should move, which of course I had no problem with. He even pointed out that if I just pulled forward about 50 feet I could park in the lot of the neighboring business.

He also said that he explained to the priests that I had every right to display a sign that said just about anything I wanted to. (Wow! A cop that understands the First Amendment –- What a concept!)

Ok. So, Doug’s in no real trouble, but his actions raise a few important questions (some offered by Doug himself):

May 12, 2010
Alabama Gubernatorial Candidate Attacked for Supporting Science
Next Post