The Mojave cross at the center of the recent Salazar v. Buono Supreme Court decision has been stolen: 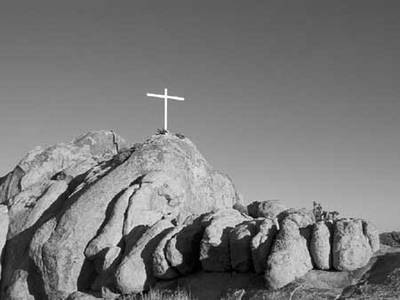 The National Park Service confirmed that the seven-foot high symbol had been ripped down sometime on Sunday or Monday by thieves who cut through bolts attaching it to Sunrise Rock in the Mojave National Preserve.

Park Service spokeswoman Linda Slater told AFP that authorities in California had kept the cross covered up with a wooden box during a long-running lawsuit where activists had sought to have it removed.

“It was reported that the box had been removed on Saturday. When they went out there on Monday to replace the cover, the cross was gone,” Slater said.

The cross shouldn’t be there but this isn’t the way to remedy the situation.

Commenter Mike points out below that, since the Supreme Court ruled that the cross was not a religious symbol, at least no one will be charge with a hate crime against Christianity 🙂

May 11, 2010
Mother Steals Gossip Girl Books From Library
Next Post

May 11, 2010 Candidates for Mayor of Toronto All Make Appeals to God
Browse Our Archives
What Are Your Thoughts?leave a comment