I Want a Beer

I’ve never had a beer in my life, but maybe it’s time to start: 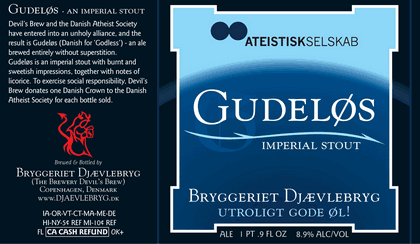 In the early part of fall 2008, a small Danish brewery, Bryggeriet Djævlebryg, released a new Imperial Stout titled, “Gudeløs.” Those translate to “Devil’s Brew” and “Godless” in English…

“Devil’s Brew and the Danish Atheist Society have entered into an unholy alliance, and the result is ‘Godless’ – an ale brewed entirely without superstition. [Godless] is an imperial stout with burnt and sweetish impressions, together with notes of licorice. To exercise social responsibility, Devil’s Brew donates one Danish Crown to the Danish Atheist Society for each bottle sold.”

On a serious note, I do wonder how certain products (that normally remain neutral on such issues) would do if they were marketed specifically to an atheist audience…

May 7, 2010
The Station That Censors Muhammad May Give Jesus His Own Show
Next Post