Christians Were Not Defying the Judge’s Ruling Today May 6, 2010 Guest Contributor

Christians Were Not Defying the Judge’s Ruling Today

It’s easy to find examples of Christians playing the victim card when they really have nothing to whine about.

Case in point: I know Christianity Today has a base they have to appeal to, but take a look at how this headline distorts the truth: 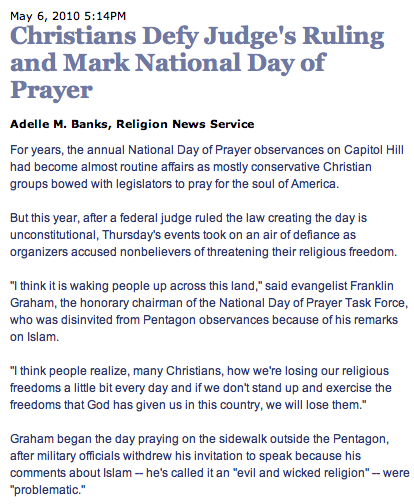 That makes it sound like Christians are standing up for their faith and going against the evil judge’s orders not to celebrate the Day of Prayer!

Except nothing of the sort ever happened.

Judge Crabb only ruled that the government cannot endorse the National Day of Prayer.

That’s it. Church/state separation. She stood up for the Constitution.

She did not rule that Christians cannot pray.

So why are they acting like she said something else?

Because the Religious Right loves to play the “victim” card. It helps with fundraising and it helps feed their own egos.

They’re not oppressed in the least. They should stop acting like it.

Incidentally, the article was posted (though not written) by Sarah Pulliam Bailey of Christianity Today. Sarah also writes for a website called Get Religion, which calls out the press when they get stories about religion wrong.

I’m waiting for a post where she points the finger at herself.

I found out that Sarah did not write the headline in question, so I want to apologize for insinuating otherwise. I still do think the headline is misleading, and that Christianity Today and the Religion New Service ought to admit as much, but this is not her error.