The latest atheist billboard (and corresponding bus ads) can be found in Fayetteville, Arkansas, thanks to the Northwest Arkansas Coalition of Reason.

“We… want everyone to know that those of us who don’t believe in a supreme being happen to be your neighbors,” added Randall Fleck, coordinator of NWA CoR. “Folks like us can be found everywhere. We’re family members, friends and coworkers. One of us might even be in the pew next to you in church. So it’s about time we started talking about our views, just as others talk about theirs.”

This billboard stands out partly because of its hilarious placement…

It sits just above a billboard for the Central United Methodist Church. 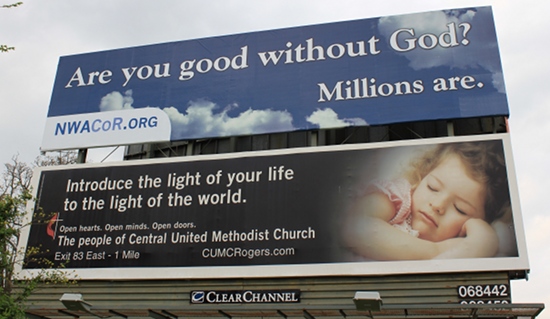 “That was a complete coincidence. We didn’t know that until we went and took a picture of the sign and said. Oh, we had no idea,” said [co-founder of Fayetteville Free Thinkers Darrel] Henschell.

And neither Henschell, nor the church’s pastor thinks it’s a bad thing.

“That could be a metaphor for how secular people and church minded people can co-exist peacefully in our society,” Henschell said.

“The first reaction is it breaks my heart,” said CUMC Senior Pastor Carness Vaughan. “But on second thought, any opportunity to get people thinking about God is a good thing.”