Almost exactly a year ago, I posted about St. Johns County School District in Florida and how they were including the following song in an elementary school concert: 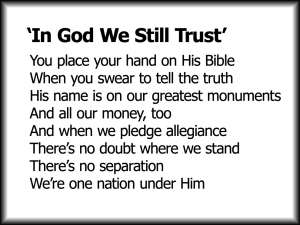 When a couple parents filed a lawsuit, their children were not just told they wouldn’t have to sing the song — they were pulled from the whole concert altogether.

It was a horrible way for the school to handle the situation.

Anyway, there’s an update on the case.

The School Board settled the 2009 lawsuit Tuesday by agreeing to pay $140,000 and not allow the song to be performed.

Shirley Davis of St. Augustine said her 8-year-old daughter told her last March that singing the song in Webster School made her “feel bad” because “it makes fun of people who don’t believe in God.”

Davis also knew a male parent of a first-grader who had complained a month previously about religious songs at Webster to the school’s teachers and principal, then to administration.

Nothing was done, she said.

The money they get after lawyers’ fees is a nice (but not life-changing) chunk. But this wasn’t about the money. This was about the school pushing religion into an area in which it didn’t belong.

Anyone with half a mind should have known what they were doing was wrong. But they let it slide and they’re paying the price for it. We can argue the size of the punishment, but no doubt they deserved one.

You can see the school’s press release about the settlement here.