Nearly twenty years ago, Sinéad O’Connor was the musical guest on Saturday Night Live and sang a song called “War.” While the original Bob Marley song talked about racism, O’Connor changed the lyric to “child abuse.”

At the end of the song, unbeknownst to the SNL people, she held up a picture of Pope John Paul II, yelled “Fight the real enemy,” and tore it up. 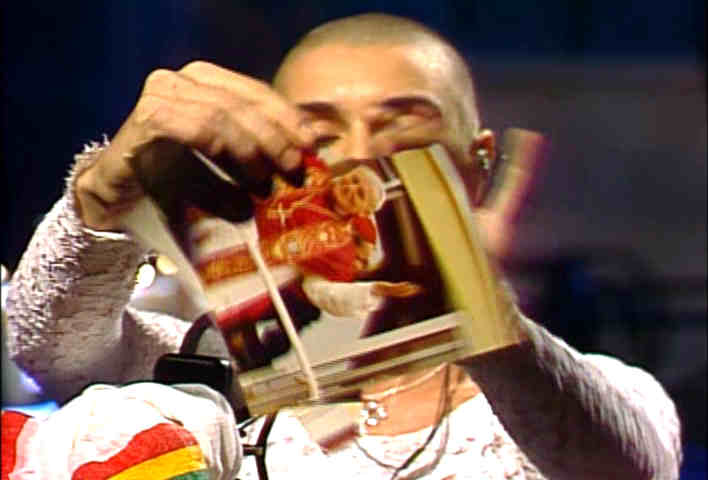 You can watch the video here (the incident takes place at the 2:55 mark).

The news came out this week that Pope Benedict XVI was part of a group that chose not to “defrock a priest who molested as many as 200 deaf boys.”

Victims give similar accounts of Father [Lawrence C.] Murphy’s pulling down their pants and touching them in his office, his car, his mother’s country house, on class excursions and fund-raising trips and in their dormitory beds at night. Arthur Budzinski said he was first molested when he went to Father Murphy for confession when he was about 12, in 1960.

O’Connor was vilified two decades ago for her actions, but she was right. You want to fight child abuse? Then you have to go after the Catholic Church. They’ve done relatively little to combat the abuse in their own backyard.

This past weekend, Pope Benedict XVI issued a “pastoral letter” apologizing to the flock in Ireland for the church’s past failures. He did not outline any disciplinary action against the bishops who many here say covered up priestly misdeeds, though on Wednesday he accepted the resignation of Bishop John Magee, who had been accused of failing to report suspected pedophile priests to police. The pope also pinned no blame on the Vatican itself for a culture of secrecy that critics say it deliberately fostered.

What does O’Connor have to say about this?

It’s a study in the fine art of lying and actually betraying your own people… He starts by saying that he’s writing with great concern for the people of Ireland. If he was that concerned, why has it taken him 23 years to write a letter, and why did he or the last pope never get on an airplane and come to meet the victims in any of these countries and apologize?

If you were the boss of a company and some of the employees of your company were known to sexually abuse children, you would fire them instantly. You would also go instantly to meet the people who had been abused and profusely apologize and offer your help in any way whatsoever to deal with this… That has never happened.

It’s a disgrace. The church has never accepted full responsibility. People need to leave that organization and convince others to do the same.

(Thanks to everyone for the links.)

March 25, 2010
Cartoonists on the Catholic Church Abuse Scandal
Next Post