In Defense of the Atheist Label March 26, 2010 Dr. Denise Cooper-Clarke

In Defense of the Atheist Label

Should we organize around the word “atheist”?  Yesterday I wrote about my disagreement with Michael De Dora Jr.’s “The Problems with the Atheistic Approach to the World” – only to have him publish a response to criticism a couple hours before my post was scheduled to go up.  In his new post, he addresses one complaint that his statement “many atheists define their entire lives around unbelief and critique of theism” is untrue:

In my piece, I wanted to specifically discuss those who embrace atheism as the core of their lives, but I also admitted that not all atheists center their lives around their atheism (that would be another contradiction of what I said about the emptiness of the word atheist). Apologies if this was misread.

But, perhaps more to the point: how do I know many atheists do such a thing? To support my claim, I referenced The American Atheists. I also referenced the local New York City Atheists (which, for anyone knowledgeable, is a militant atheist organization) as an example of the “(Location) Atheists” groups we see around the nation. Then, of course, there is the Out Campaign.

But even though the American Atheists are more aggressive than other groups, they’re are far from “defin[ing] their entire lives around unbelief and critique of theism.”  A glance at their website shows a host of positive Aims and Principles which include promotion of freedom of thought and inquiry, separation of church and state, nontheistic ethical systems, and general welfare.  I can’t imagine that Michael really believes they “embrace atheism as the core of their lives,” so I started thinking about what he must mean instead.

I get the sense that Michael is really objecting to atheism being used as an organizing principle at all (hence his apparent opposition to the Out Campaign, which I support).  Some of his comments point in that direction, such as his critique of the New Atheists for “rallying around atheism” and “push[ing] people to start huddling under the ‘atheist’ banner.”

Should we rally behind the “atheist” banner? The discussion of tactics is worth having.  As it happens, I don’t see the word to be quite as empty and non-descriptive as he argues in his original piece.  The atheist label has real value and should be one of the tools of the secular movement.

While it’s true that the word ‘atheist’ only says that a person has no god belief, it’s amazing how many other views follow or are at least correlated.  People who don’t believe in a god tend to share values because they focus solely on secular concerns.  There’s no particularly good secular reason to deny homosexuals the right to marry, so most atheists support that right.  We don’t believe in a god who cares about our politics, so most atheists support a secular government.   Lacking belief in divine revelation, atheists tend to promote science as the best way to learn about the world.  I can walk into a meeting of the Omnipresent Atheists in Columbus and expect to find a lot of people with values similar to my own.

I suppose a name like “American Atheists” doesn’t explicitly convey all that they stand for, but I think it’s implied to mean “American Atheists for a Variety of Values Which Tend to Particularly Stem from Focusing on Secular Concerns.”  Labels aren’t expected to be perfectly descriptive, they’re expected to be useful at implying shared values, explicitly or implicitly. 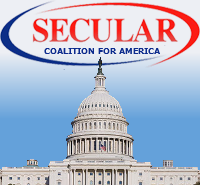 To see the value of the “atheist” label, look no further than the Secular Coalition for America.  By trying to represent nontheists (a new, less-stigmatized form of the word “atheists”) they’re broad enough to appeal to member organizations like the American Ethical Union, the Secular Student Alliance (my new place of employment), American Atheists, and the Society for Humanistic Judaism.  All these diverse groups came together under the inclusive banner of “nontheist” and found we had more than enough in common to work together on Capitol Hill toward a set of shared goals.

Don’t get me wrong, more specific labels like “skeptic” and “humanist” definitely have their purpose.  But so does a unifying, inclusive banner.