Atheists and Juries: Advice to Lawyers

The American Society of Trial Consultants publishes a journal called The Jury Expert, which features an article about atheists this month (PDF). Douglas L. Keene and Rita R. Handrich write about how lawyers should act when they have atheist clients and when an atheist may be on the jury.

They offer a few tips to lawyers, most of which make sense if the only purpose is to win the case:

If your client isn’t ‘out’ as an atheist, it is better for you to keep it that way. There is no point in complicating his or her identity as a litigant. On the other hand, if your client has ever publicly acknowledged being an atheist, assume it’s on the internet and that jurors may learn about it.

They also suggest a lawyer may not want a hard-core atheist on a jury:

You can fairly assume that anyone who publicly identifies him- or herself as atheist is unusually opinionated and might be too unpredictable to have on your jury.

We see this in pre-trial research with anyone who identifies as extreme (e.g., very liberal or very conservative). They are often not people we want on juries because we simply cannot predict which direction they will go on a particular case, and they tend to have a polarizing affect on the jury.

Do you want atheists on your particular jury? It depends. As we mentioned earlier, you probably don’t want a militant atheist — like most militants they are likely too unpredictable and a potentially polarizing force in the deliberation room… Of course, if you want a contentious deliberation or a hung jury you may choose to inject a militant atheist, but we aren’t getting into that for this article.

Unpredictable? I doubt it.

If anything, I think you could predict fairly accurately where most atheists would stand on a number of issues. I know this is playing to the stereotype, but If I were a lawyer, I would be thrilled to know whether or not a potential juror was an atheist — it would provide me with an easy way to figure out if I wanted the person on the jury or not. Atheists are a lot of things, but a wild card on a number of issues is not one of them.

And the notion that we “tend to have a polarizing affect on the jury”? Again, that knowledge of a potential juror’s atheism would only help out. If I thought an atheist would side in favor of my client, I would want that person on the jury — partly because atheists know how to make their case to other people in a logical manner and could be persuasive in that regard.

Keene and Handrich also provide a quick reference guide to lawyers who may have to deal with atheist (or very religious) jurors. Note that they use the word “we” in a royal sense — studies show Americans are distrustful of atheists and have many biases against us: 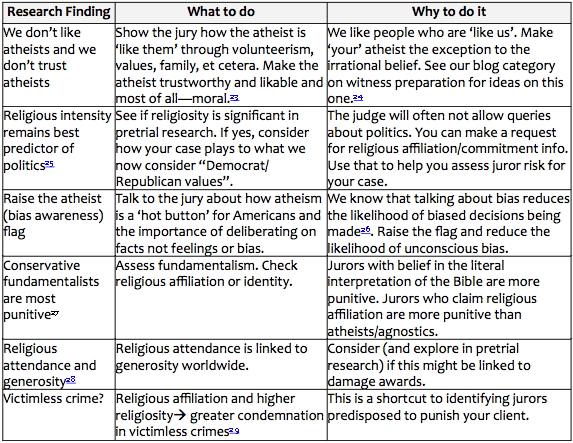 Their advice for lawyers is mostly sound and they do a decent job of educating them about what we do have in common and how we think. If their piece rubs you the wrong way, remember that their job is to be strategic, not to appeal to or fight against atheists.

I’ve never been on a jury, but I wonder if any of you have experiences being on one and whether religion played any role during deliberations.

March 22, 2010 Atheists Aren't Buried Here
Browse Our Archives
What Are Your Thoughts?leave a comment