A Christian Solution to the Health Care Crisis

Don’t like your current insurance or the proposed government solution to the health care crisis?

NPR’s Jeff Brady has a story on what a group of Evangelical Christians are doing about it: pooling their health costs and paying for each other’s health care.

James Lansberry, the vice president of Samaritan Ministries, says the concept is simple. First there’s a $170 annual fee to cover Samaritan’s administrative costs. His nonprofit group then compiles members’ health care bills and tells its 14,000 households where to send their monthly checks.

“The money doesn’t get received at our central office — it goes directly from one family to another,” Lansberry says. “So each month I send my monthly share of $285 directly to another family.”

There are some rules, of course:

You have to be Christian. And your Pastor has to sign off on that.

No money will be used to pay for an abortion. (What about in the case of ectopic pregnancies? I can’t find that information.)

If you got a sexually transmitted disease from outside your marriage, you’re out of luck.

And, in exchange, there’s no guarantee you’ll get paid.

Here’s a visual guide to how it works: 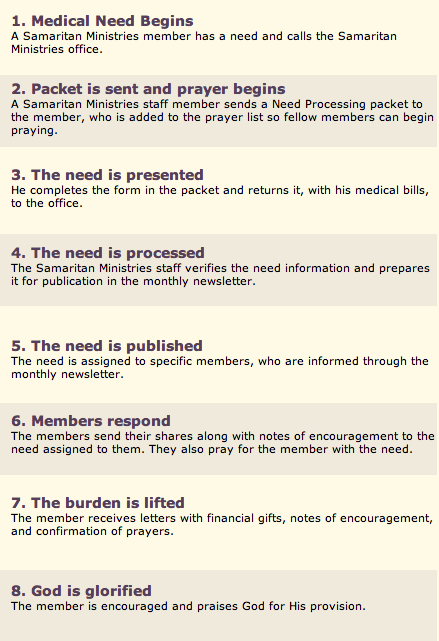 Just to be clear, this is not an insurance plan. If you’re on this, you’re foregoing insurance and relying on the gifts of others to cover your needs. And those gifts may not be there when you need them the most.

11. Mental Illness — Expenses from treating mental illness are not publishable, including bills for mental, emotional, spiritual, psychological or psychiatric tests, or treatment.

Meanwhile, if there’s any problem you have with them, you waive your right to ever take them to court.

I don’t get why anyone would want to buy into this system. It just sounds like a disaster waiting to happen.

As many problems as the insurance industry has, Samaritan doesn’t seem to provide the fixes. It just isolates these Christians even more from other people — just like Jesus would have wanted? — and only offers hope that your needs will be met. (Isn’t it precisely the kind of “socialized medicine” conservative Christians have been railing against?)

I’m sure those of you with more knowledge about health care can weigh in more on the benefits/problems with this sort of system.

(Thanks to Tina for the link)