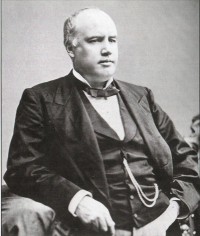 At the Center For Inquiry in Hollywood, California last Sunday, a great figure from the Golden Age of Freethought gave a moving and inspiring account of his remarkable life. Robert Green Ingersoll, masterfully portrayed by actor and writer Richard McNally enthralled us with stories and speeches from his prime years from around 1860 to 1890.

Until now, I knew very little about the man known as “The Great Agnostic.” Now I want to learn much more about him, because the glimpse I saw showed me that after 150 years, his work is still entirely relevant and still very much needed. A prolific writer of books and essays, he published open letter debates with influential thinkers around the world. Despite frequent efforts by clerics to impugn his reputation, he was a widely popular speaker. As many as 50,000 people at a time would come to hear him speak as he traveled around the United States.

McNally conveyed Ingersoll’s eloquence as a persuasive speaker, his tenderness toward his family, his hilarity in his attacks on religious hypocrisy, his tenacity as an abolitionist against slavery, his courage in war, his skill in politics, his deep compassion for his fellow man, and his overarching integrity.

So Ingersoll is “live” in both his still-pertinent ideas, and in this excellent portrayal.

The 40 minute, one man performance, titled “A Visit With Robert Green Ingersoll” would make a wonderful event for any atheist or freethinker’s group. Richard McNally can be reached through Atheists United.