Smut for Smut is a Bad Idea March 2, 2010 Guest Contributor

Smut for Smut is a Bad Idea

Members of the Atheist Agenda group at the University of Texas at San Antonio ran a “Smut for Smut” campaign yesterday — similar to one run in previous years by the same group.

Essentially, it works like this: You give them your Bible. They give you pornography. It’s all smut, right?

It certainly gets them media attention (though less this year than in previous years). It does spark a debate. It does get people to join the group.

And I get the point. The Bible has smut and violence and that needs to be pointed out. It’s not all rainbows, flowers, and Jesus.

Several atheist groups have gotten attention for positively promoting their ideas — the United Coalition of Reason‘s billboards (“Are You Good Without God? Millions Are”) are not denigrating religion at all. They get attention. And they make religious people look bad when they protest those innocuous signs.

There are so many reasons people should not be religious. Why not give them a compelling reason to toss faith aside? Letting them know that atheists can be just as jerky as evangelical bible-thumpers isn’t helping the cause.

I understand that not everyone appreciates a “gentler” approach to all this. We need all types in a movement. But why revel in a publicity stunt that only makes atheists look bad?

The Society of Non-Theists at Purdue University ran a much better event a couple years ago when they ran a Fiction for Fiction campaign: 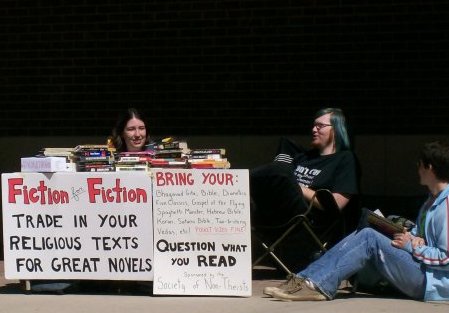 Why is it that this event went so much more smoothly — without a mass of protesters — than the Smut campaign?

It sparked a real conversation, it got people interested in the group, and they didn’t go out of their way to piss people off.

That’s the type of group I would be proud to join.

If Atheist Agenda was the only campus group available for people like me, I probably wouldn’t join it. I don’t think I’m alone. And at a time when we need campus atheist groups more than ever, it’s sad that some non-religious students may choose not to join a group like that at all because they don’t want to be lumped in with that crowd of atheists.

I suppose it could be worse. They could’ve burned the Bibles (in support of free speech) instead of the current plan to donate them to libraries.

Still, I would love to hear from any UTSA student changing his/her mind (in a good way) about atheists as a result of this.