The Illinois Family Institute is at it again: The Day of Silence (a student-run initiative during which volunteers don’t speak on behalf of the members of the GLBT community who have been forced to be silent about their sexual identities) is coming up in April and IFI can’t stand any of that “inclusive,” “tolerant,” “accepting” type of behavior:

Parents should call their middle and high school administrators and ask one question: Are students permitted to refuse to speak in class on the DOS? If the answer is yes, or if it is evasive or unclear, call your child or children out of school on April 16.

In other words, their solution to other students’ tolerance is… taking their own kids out of school so they can’t get an education.

Well played, Laurie Higgins. Showing off your group’s collective brainpower on that one…

They act as if their own kids are being forced to participate. Obviously, that’s not the case.

And as anyone who has participated in the DOS knows, it’s not “all-silence-all-the-time” that day, anyway. If you have to give a presentation, you give it. If you have to answer questions in class, you do it. This shouldn’t disrupt the school day, and participation is not an excuse to not do your required schoolwork. Hell, if students want, they can maintain their silence in the hallways only.

Higgins’ demand is pathetic, cowardly, and an acknowledgement that IFI members and their children are too weak to handle opposing viewpoints.

If you ask IFI, they’ll tell you (PDF) this isn’t an anti-gay demonstration on their part.

School administrators err when they allow the classroom to be disrupted and politicized by granting students permission to remain silent throughout an entire day. The DOS requires that teachers either create activities around the silence of some or many, or exempt silent students from any activity that involves speaking. Furthermore, DOS participants have a captive audience, many of whom disagree with and are made uncomfortable by the politicization of their classroom.

(By the way, the DOS “requires” nothing from educators. That’s just an outright lie.)

But look at that first line — the issue is with politicization, not homosexuality! Are they being honest? Of course they’re not.

It’s easy to test that claim, too. As it turns out, the DOS is not the only game in town.

It’s the same idea with essentially the same rules. And students participate across the country. It’s not like IFI hasn’t heard of it.

Yet, does IFI call for their members to remove their kids from school on this day as well? Isn’t this also a case of politicization of the classroom? Where do they stand on student participation in this case? Where’s the outrage?

Go ahead. Search their website. Try and find a mention of it.

This is what I got: 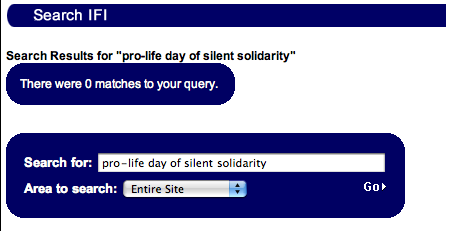 IFI knows they can’t oppose it because their members love what it represents.

They know they can’t support it because it would be hypocritical.

So they ignore it altogether. They plug their ears, close their eyes, and hope no one will notice.

If you want to know why the stereotype of Christians made by non-Christians is so negative, look no further.

I would hope there are some Christians shaking their head right now. How should they respond?

They should contact IFI and let them know how ashamed they are of their actions. Tell them you fully intend to support your child’s participation in the DOS. Or, if that’s not your thing, tell them you have no desire to take your children out of school that day and that you support other students’ right to stand for their beliefs.

Hell, if you really want to upset them, let them know that this isn’t what Jesus would’ve done.

What a sorry group of people at IFI. I’m *so* revoking my membership this year.

February 23, 2010
Have the Richard Dawkins Forums Died?
Next Post