The Religiously Unaffiliated Are All Over the Place February 21, 2010 Guest Contributor

The Religiously Unaffiliated Are All Over the Place

Every time we see the word “none” or “unaffiliated” in a religious survey, we always need to take it with a grain of salt. “None” is not the same thing as “atheist” and “unaffiliated” can mean just about anything. A new study released by the Pew Forum only confirms this.

They asked the following question: “What is your religious preference? Is it Protestant, Catholic, Jewish, some other religion, or no religion?” 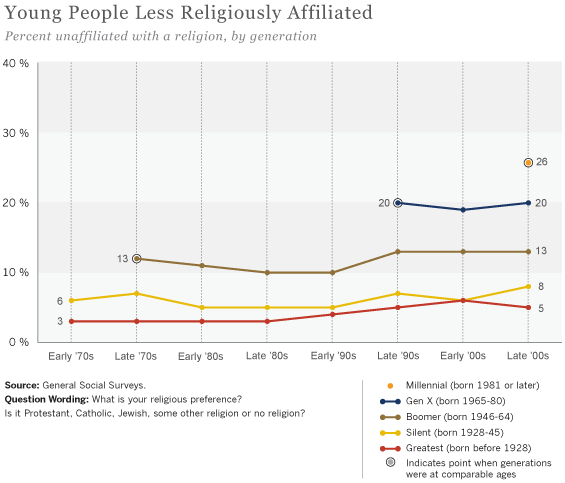 That dot at the top right is for those of us under 30 who are not affiliated with any particular faith — and that number has increased with each passing generation.

What about church attendance? We’re not doing that as much either: 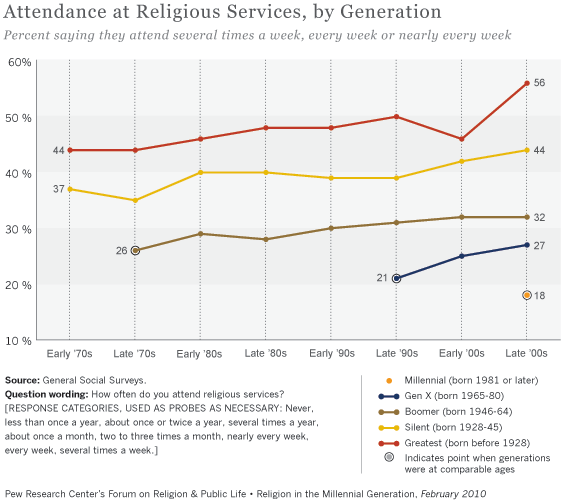 Only 18% of us Millennials attend church on a regular basis.

So, this is all good news, right?

It turns out that people in the “unaffiliated” category have all sorts of supernatural beliefs, even though they aren’t linked to any specific denomination.

Let’s look at the difference between the heathen-leaning Millennials and non-Millennials (Spoiler: there’s very little difference…): 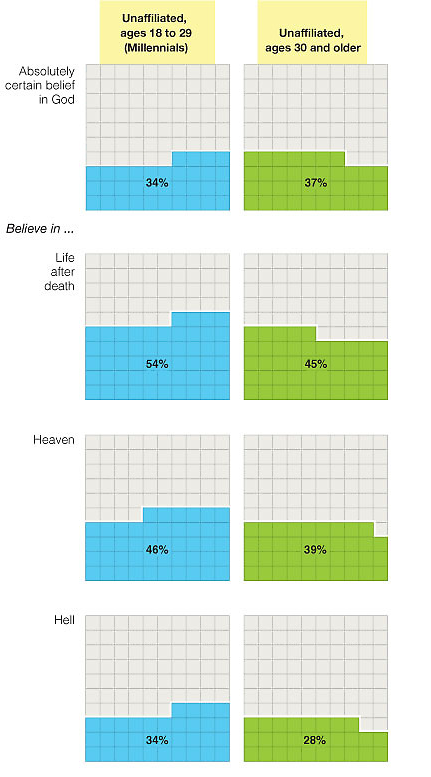 We may not be going to church as much, but we’re buying into the same superstitions and mythologies. Hell, in some cases, we’re even worse than our elders!

Charles Blow summarizes this in the New York Times:

So, anyone laboring under the delusion that the generation weaned on MTV would move us closer to being weaned of an abnormally high level of religiosity — at least when compared with other industrialized countries — may have to keep waiting.

And the spiritual quests of the millennials may eventually have policy implications. According to the Pew report, “They are slightly more supportive than their elders of government efforts to protect morality, as well as somewhat more comfortable with involvement in politics by churches and other houses of worship.”

In other words, even though the size and number of churches are declining, Christianity (at least in theory) is not. We’ll be fighting the same battles in the future that we are today.

It’s not enough to get people to leave their church or no longer call themselves Christians.

We need to keep working to rid them of the Christian mindset altogether — the mindset that basks in the glory of a god that no one can see or hear outside their own mind and that prides itself on anecdotal stories rather than solid, reason-based evidence.

February 21, 2010 Videos from the Secular Student Alliance Leadership Conference
Browse Our Archives
What Are Your Thoughts?leave a comment