Because of my own situation last summer involving a religious nut going after my public school teaching job, a lot of people have sent me the story of Melissa Hussain, the North Carolina 8th grade teacher whose job is in jeopardy because of how she handled her über-religious students. She’s currently suspended with pay. And there’s very little information on her story other than a one-sided article against her by T. Keung Hui.

Hussain wrote on the social-networking site that it was a “hate crime” that students anonymously left a Bible on her desk, and she told how she “was able to shame her kids” over the incident.

Here’s the actual context of the “shame her kids” line: 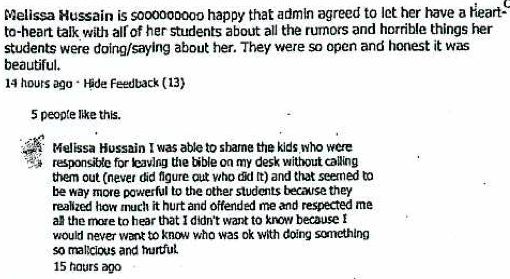 That sounds like a teacher I *want* my kids to have. Not some evil teacher out to attack religious kids.

Here’s the story in a nutshell: religious students were harassing her and disrupting her classroom. They put the aforementioned Bible on her desk in December along with a card reading “Merry Christmas” (emphasis theirs). They put a postcard of Jesus on her desk. They called her a “Jesus hater.” They would sing “Jesus loves me” (presumably during class). They read the Bible instead of doing class work.

I know little about the situation other than what I’ve read in Hui’s article.

But here’s my theory (as a relatively young teacher who has dealt with similar kids).

Some kids found out about her religious beliefs (I don’t know what she is, but I think I can safely say non-Christian) and they told their friends.

The kids wanted to bait her, so they began pushing her buttons by bringing up religion in class whenever they possibly could. It wasn’t just a waste of class time, it was really annoying, and it threw Hussain off kilter. Instead of laughing it off or just waiting till she got back into the office to complain, she reacted immediately… which is precisely what the kids wanted.

She threw the postcard in the trash. When the students were reading the Bible instead of doing class work, she took away the distraction (which the kids knew damn well she would do, which is why they were reading it in the first place). She may have sent students to the office during the evolution lessons, but I doubt it was *only* because they asked about the role of God in creation. It’s probably because they wouldn’t let up about it, they wanted to argue about religion instead of learning the basic facts of evolution, and when she couldn’t continue teaching the class without disruption, she told the kids in question to get out of the classroom and go to the office.

Then, she complained to friends about the situations… which is understandable. But she did it on a Facebook page that didn’t have proper privacy filters set. That was a mistake on her part. The kids could find her wall postings, take screenshots, etc. So those comments were sent around the school, too.

Though if you read the Facebook comments (PDF), they don’t show any anti-student maliciousness on her part. If anything, they just show a teacher who is shocked that kids would be so damn mean. She wants them to be aware of the hurt they’re causing (good luck with that). But she posted them on a public Facebook page and others have taken them out of context.

Even worse, they’re using her friends’ comments against her. That’s just ridiculous. That’s like criticizing me for something a random commenter on this site says. Just because someone posts something on your site (or Facebook wall) doesn’t mean you automatically approve of it.

It’s all a big positive feedback loop that’s not going in Hussain’s favor.

And when you see the awful article about her, it’s no wonder people are having a hard time sympathizing with her.

Certainly, the parents are supporting their kids’ version of the story. That’s a problem, too. Most teenagers I know either absolutely love or totally hate every teacher they have. There’s not a lot of in-between. And when they “hate” a teacher, they think the teacher is out to get them at all costs, as if teachers care about petty revenge against irritating students. No doubt some religious students would see a non-Christian teacher as someone who’s “totally out to get” them.

I have yet to see any parent or administrator saying that these kids were being the little arrogant jerks they were and that the kids deserved punishment instead of the teacher.

On a side note, I think more people would sympathize with Hussain if they discovered she was a Muslim or a Jew. In those cases, it’s understandable why she’d be upset at kids trying to push Christianity on her. But because her religion is unstated, that means she could be an atheist and she therefore deserves all the scorn!

A local education association is making the mistake of inching toward the side of the students:

… Jennifer Lanane, president of the Wake County chapter of the North Carolina Association of Educators, said she wasn’t aware of the details of the Hussain case, but said that teachers need to be careful about information they put online.

“We are public figures,” Lanane said. “We are held to a higher standard.”

Pathetic. Hussain’s mistake pales in comparison to what these ignorant kids were doing to her. Hussain needs the support of the administration and teachers’ groups, not their derision. With friends like those, who needs enemies?

No doubt Hussain made a mistake by not using better privacy filters on Facebook. But that’s not the real issue here. The problem is that these students were harassing the teacher and they’re being let off the hook.

The parents aren’t helping, either:

… Annette Balint, whose daughter is in Hussain’s class, said the students have the right to wear those shirts and sing “Jesus Loves Me,” a long-time Sunday School staple. She said the students were reading the Bible during free time in class.

“She doesn’t have to be a professing Christian to be in the classroom,” Balint said. “But she can’t go the other way and not allow God to be mentioned.”

Hussain’s comments included one where she complained that she “hates” parents who complain about their child’s first B in middle school. She said her husband suggested she start a blog “based on ridiculous students and their parents.”

Balint said it was clear to the class that Hussain was talking about her daughter. “I feel violated that she would say those things,” she said.

Balint is the quintessential annoying parent: her daughter doesn’t get the best grade and she takes it out on the teacher.

You know, when Balint lets me walk into her place of work wearing a “god is dead” shirt while I pester her nonstop about how god doesn’t exist and leave a copy of The God Delusion on her desk — all while she’s trying to help me out — then I’ll take her whining more seriously. Hell, for all we know, Balint liked that her daughter “spread the Jesus” in the classroom.

Hussain deserves to get her job back. Maybe she also deserves a reprimand for not using some common sense when it comes to the social networking site, but that’s about it.

Meanwhile, the kids who are causing all this trouble need to be punished. Maybe writing an apology to Hussain and an essay on how evolution works would do the trick.