Over the weekend, I stumbled across the cover of the new issue of People on a library table: 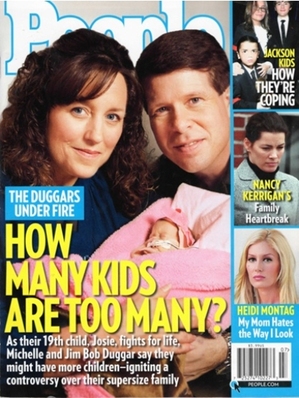 19 kids…? My eyes wanted to bulge at the sight of that number, but they stopped doing that when the number hit double digits.

It’s just not a surprise anymore.

The question on the cover is “How Many Kids Are Too Many?” (Really, People magazine, it took you 19 kids to ask this question???)

I’ve heard people go after the Duggars for a number of reasons:

But the Duggars are not like the Octomom, who is trying to raise 14 children as a single mom while unemployed and on public assistance. They’re not desperately trying to hog the spotlight. (Really. I mean that. Despite their level of publicity, the Duggars don’t strike me as media-whores in the same way that Jon and Kate do.) The family’s health also seems to be pretty good overall (the most recent child was born premature, but I don’t think the age of the mother or the number of previous births has anything to do with that.)

There are some arguments to silence the critics:

So what’s the problem?

I doubt anyone would ever want our government instituting some law about how many kids a family should be allowed to have.

We argue that women should have the right to do as she wishes with their bodies… and this is a woman doing just that.

The best argument I’ve heard has to do with the older children having to give up their lives to take care of the younger children, but this doesn’t strike me as too awful. The kids are happy to be helping out their family in this way.

Don’t like that they’re raising the kids with their particular brand of religion? That’s an argument against fundamentalist Christianity, not this particular family.

Is Michelle just brainwashed into doing all this? Again, it’s an argument against faith, not specific to just this family.

Incidentally, my interview with Kathryn Joyce, author of Quiverfull: Inside the Christian Patriarchy Movement, can be found here. It describes the type of lifestyle the Duggars have chosen to follow.