Baptists Kidnap 33 Haitian Children in the Name of God

Apparently, Christian sects are stealing children all over the place. First it was the Mennonites. Now, it’s the Baptists, some of whom are pictured below.

This story is quite possibly more disturbing than the last. 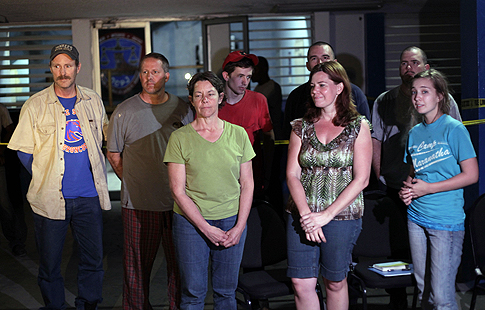 A group of Baptists kidnapped children from Haiti — some of whom were separated from their family because of the devastation there, not because their parents had died — in the name of Jesus.

Ten U.S. Baptists detained trying to take 33 children out of earthquake-shattered Haiti without government permission say they were just trying to do the right thing, applying Christian principles to save Haitian children.

Prime Minister Max Bellerive on Sunday told The Associated Press that the group was arrested and is under judicial investigation “because it is illegal trafficking of children and we won’t accept that.”

The church group’s own mission statement said it planned to spend only hours in the devastated capital, quickly identifying children without immediate families and busing them to a rented hotel in the Dominican Republic without bothering to get permission from the Haitian government.

“One (8-year-old) girl was crying, and saying, ‘I am not an orphan. I still have my parents.’ And she thought she was going on a summer camp or a boarding school or something like that,” [orphanage spokesperson George] Willeit said.

It would be so much harder to attack Christians who funnel their donations into food and water and other useful things.

When they mix it with proselytizing, separating kids from their parents, and circumventing the legal system, that becomes the focus and deservedly so.

The group and their church are saying this is all a big misunderstanding. I hope they’re telling the truth, but Christians who proselytize don’t have a good track record when it comes to being honest about their intentions.

When God calls you to a certain mission and a specific action he’s not going to let it fail,” [father of a detainee, Mel Coulter] said. “I’m convinced that nothing will stand in the way of Him accomplishing his purpose through this whole team. I know even as we speak and the 10 people sitting in the Haitian jail are convinced of the same thing.”

That’s not helping. Just stick to the proper story: you wanted to help kids not take them away from their families, you’re willing to go through proper legal channels, you’re not trying to brainwash these kids into your faith, etc.

Unless that’s just not true. In which case, leave these kids alone and just offer your support from a distance.

(Thanks to everyone for the links.)

January 31, 2010
Wyoming School Board Says "No" to "No Place for Hate" Posters
Next Post

January 31, 2010 A Fair and Balanced Debate on... Everything?
Browse Our Archives
What Are Your Thoughts?leave a comment