Is America a Christian Nation?

President of the Secular Coalition for America Herb Silverman has a piece in the new CQ Researcher (PDF) arguing that America is not a “Christian Nation” (p. 17):

America is a Christian nation in the same way it is a white nation. The majority of Americans are white and Christian, but we are not now nor have we ever officially been a white or Christian nation. Those who believe otherwise might be harkening back to the first Europeans who settled here…

There have always been people who erroneously believe the Founders intended to establish a Christian nation. But the framers were careful and thoughtful writers. Had they wanted a Christian republic, it seems highly unlikely that they would somehow have forgotten to include their Christian intentions in the supreme law of the land. And I defy anyone to find the words “God” or “Jesus” in the Constitution.

Christianity teaches, and most Christians support, a jurisdictional separation between church and state, but not separation of God and government. A secular state is not American, not Christian, nor wise. Civil government must obey God’s laws.

Yeah… I think Herb wins this contest hands down.

I’ve seen it before but it never ceases to impress me. Just look at the percentage growth from 1990 to 2008 for the “Nones” (and the drop in percentage of “Total Christians”): 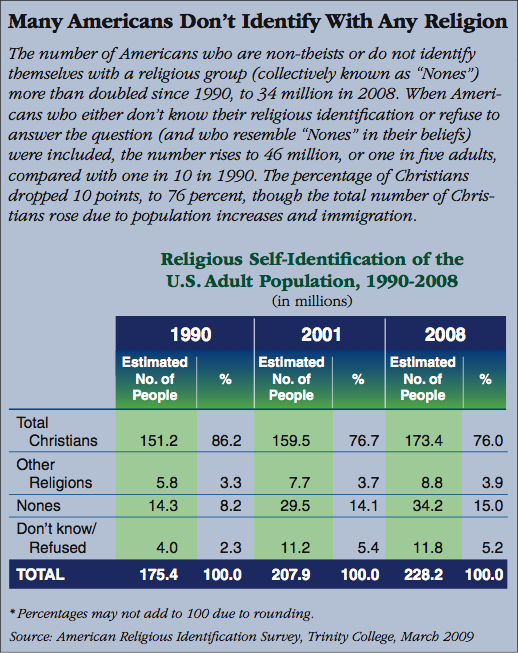 As long as we continue to speak the truth about the world we’re in, constantly knock down the superstitions that plague so many minds (like the one that we’re a “Christian Nation”), and come out as atheists to the people we know, the trend will continue going in our direction.