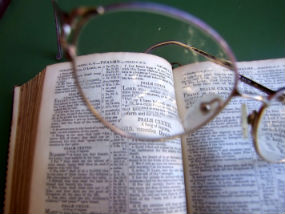 If a story didn’t happen, can it still be useful? I first started thinking about this question in college after taking a Hebrew Bible course with professor Bart Ehrman.  Evidence points to most of the Bible being historically inaccurate. As Ehrman presented argument after argument for why the stories in the Bible couldn’t be taken literally, he took pains to mention that even if the stories didn’t happen, they might be “metaphorically true.” Most of this post won’t apply to the hardcore religious people who think everything in the Bible is literally true, addressing instead the liberal Christians who, like Ehrman, talk about ‘metaphorical truth.’

But how can a false story be metaphorically true?  That’s the question for my second Cafe Inquiry discussion group, held tomorrow at 7PM.  If you can make it, you should come by!  It’s in the CFI-DC chapter right by the Eastern Market Metro (map).

Marcus Borg, author of Reading the Bible Again for the First Time: Taking the Bible Seriously But Not Literally describes the concept in question well:

By “metaphorical approach,” I mean most broadly a nonliteral way of reading biblical texts. A metaphorical reading does not confine itself to the literal, factual, and historical meanings of a text. It moves beyond to the question, “What does this story mean as a story, independent of its historical factuality?”  p. 37f.

I take ‘metaphorically true’ to mean that the story’s implications can be accurate whether or not the details giving the impression really happened. One example Ehrman gave was that of George Washington and the cherry tree, in which the young George said the famous words “I cannot tell a lie.” The lesson of the story is that George Washington was an incredibly honest man. Though the account was later found to be a complete fabrication, we have other historical information to support the claim that Washington was a very honest man with great integrity. I could understand if someone wanted to say the story didn’t happen but is still metaphorically true.

If the story were factually accurate, then we would have some evidence that the lesson is true: we could say that in that case, George Washington behaved honestly.  Factual stories act as evidence of their own lesson.  But when a story didn’t really happen, it becomes nothing more than an assertion. The author – Parson Weems, in the case of the cherry tree myth – wanted us to believe that Washington was an honest man and wanted to express that assertion via a fictional story. He might be speaking from authority, having combed through historical accounts. But unless we want to simply trust that the author is telling a truth, we need outside evidence to judge whether this factually inaccurate story has the saving grace of being metaphorically true.

When we acknowledge that the Bible is nowhere near historically accurate, it loses its power to act as evidence.  This is where the practice of cherrypicking interpretations sometimes comes from. Liberal Christians who aren’t tied to the literal meaning of the text have to decide for themselves what ‘metaphorical truth’ to glean from each passage, making sure to conform their understanding to what they already believe.  Instead of drawing knowledge from the text, they’re bestowing their own meaning onto the stories.  The Bible is no longer a source of truth; it’s merely a reflection of preexisting opinions.

Often the lesson of a biblical story cannot be supported by any other evidence we can gather.  Borg presents a metaphorical interpretation of the Gospel of Matthew:

In presenting the story of Jesus’ birth, Matthew echoes the story of Moses’ birth. Just as the life of Moses was threatened by Pharaoh’s command that all male Hebrew babies be killed, so Jesus’ life as an infant is threatened by King Herod’s command that all male infants in the area of Bethlehem are to be killed. Matthew’s meaning is clear. Jesus is like Moses, Herod is like Pharaoh, and what is happening in and through Jesus is like a new exodus. (p. 197) [emphasis mine]

He can’t possibly be openly using fictional stories of the Jesus’ birth to justify some meta-narrative comparing Jesus to Moses, can he? If they didn’t happen in reality, the stories can’t be used as evidence for an argument about reality.  IS Jesus in some way like Moses?  Matthew sure wants us to think so, but should we take his lesson to be metaphorically true?  Show me the slightest bit of real evidence that Jesus – the person, not the character in fictional stories written by Matthew – was like Moses.   There is no historical evidence that these events happened.  There is no historical, outside evidence to back up the overarching “lesson” that Jesus was somehow like Moses.  The nativity story in Matthew is an excellent example of a story which is neither factually nor metaphorically true.

It’s even worse when people make decisions on how to live their lives based on acknowledged fictional stories.  So much intellectual thought has gone into the fruitless (pun definitely intended) discussion of original sin, sacrifice, and redemption.  Borg gets so close to figuring it out…

So I began to take seriously the likelihood that Adam and Eve had not been real people. But if that likelihood turned out to be true, what were we to make of the story of the first sin, commonly called “the fall,” in the Garden of Eden? If “the fall” was not historical, how (I wondered) would this affect the Christian story of universal sin, our need for redemption, and Jesus’ death as the necessary sacrifice?

… before he withdraws into metaphorical interpretations of Genesis.  Recognizing that “the fall” never happened should abolish any silly notions of “universal sin, our need for redemption, and Jesus’ death as the necessary sacrifice.”  There’s simply no reason to believe that babies are inherently born sinful, that we need redemption, or that executing an innocent man can absolve others of this imagined sin.

Fictional stories that are independently determined to be metaphorically true – like the story of George Washington – can be fun and interesting ways to teach a lesson without giving real evidence.  Any lessons implied from fiction are basically arguments from authority (“trust me, this fictional account teaches something accurate”).  If a person has utter faith that the Bible is accurate and divinely inspired, then they’re putting their trust in that authority.  Any lessons taught through the medium of fictional stories must be metaphorically true, because they come from a trustworthy source.  I happen to find the evidence against the notion overwhelming, but that’s a topic for another day.

What’s your take on the metaphorical approach to factually inaccurate stories?

January 25, 2010
How Did the Atheists Fare on a Canadian Game Show?
Next Post

January 25, 2010 Polyamory is Wrong
Browse Our Archives
What Are Your Thoughts?leave a comment