From Baseball to the Priesthood January 25, 2010 Guest Contributor

From Baseball to the Priesthood

Grant Desme was a rising star in the Oakland A’s franchise, possibly starting this season playing AA baseball. (AAA is even better, followed by the major leagues.) 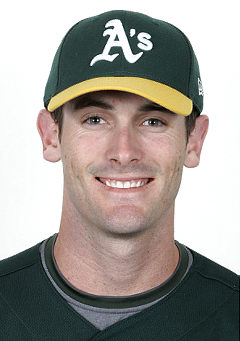 He batted .288 with 31 home runs and 89 RBIs in 131 games last year. Then he starred in the Arizona Fall League, where some of the game’s top prospects compete.

Desme hit one home run in his 12-game tenure with the team, but [broadcaster Rob] Fai remembers it as “probably the longest home run in franchise history.”

Desme is leaving baseball, though.

To become a priest:

“I’m doing well in baseball,” Desme told reporters on Friday, according to the San Francisco Chronicle. “But I had to get down to the bottom of things, to what was good in my life, what I wanted to do with my life. Baseball is a good thing, but that felt selfish of me when I felt that God was calling me more. … I love the game, but I’m going to aspire to higher things.”

There’s a good chance he might not have made it to the major leagues due to some injuries in his shoulder and wrist. During his injury-induced time off, he had time “to read and study the Bible and to talk to teammates about his faith.”

I don’t mock him for his decision — it’s a personal one. But, like his coach, I have a difficult time understanding it.

Desme presumably wants to help people. Helping people usually costs money. So why not play baseball for a few years, which can pay very lucrative, and then give part of that fortune to Haitian orphans?

There are plenty of people who give up well-paying jobs to do something they are more passionate about. It seems like Desme fits that mold.

I guess I’m just intrigued that anyone’s passion would lie in a Catholic Church.

January 25, 2010 Who's the Ex-Mormon of the Year?
Browse Our Archives
What Are Your Thoughts?leave a comment