The Difficulties of Starting a High School Atheist Group

The Secular Student Alliance has nearly 200 affiliates at colleges across the country and beyond. But we don’t have a lot of groups at high schools. When I hear stories like this one, it makes me think our staff should be making starting high school atheist groups a priority. (Update: The SSA does have material available for high school educators about non-religious students.)

Skyler Curtis wanted to start a “Fellowship of Atheist Athletes” group at Rising Sun High School in North East, Maryland. That shouldn’t have been a problem since there’s already a Fellowship of Christian Athletes group at the school.

For whatever reason, that idea was not approved. (I don’t know the details behind that, but that sounds like a real legal problem that needs to be looked at.)

But all wasn’t lost. Skyler named the group “NonReligious Solutions” (NRS) and the administration approved it. Posters were also approved and put up around the school: 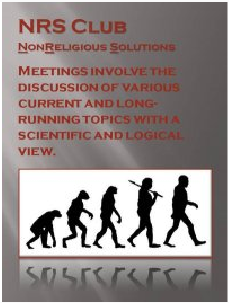 … and then they were torn and defaced. One of the little vandals was caught and suspended. Good.

Skyler also started an NRS Facebook page and, wouldn’t you know it, another student has started an anti-NRS page. (The atheist group has more members, thankfully.)

Phil at Skeptic Money also has a scan of a letter-to-the-editor that was sent to a local paper. You have to see it to believe it:

My daughter comes home today and informs me they have started a new club in Rising Sun High School. The club is known as NRS, which stands for Non Religious Society.

The members of this club have proceeded to hang posters along the halls of the school. When a student tore the posters down, because they offended him, he got suspended from school. Apparently the students are not allowed to touch these posters.

To say I was shocked is putting it mildly. My daughter does not hang posters of her Catholic religion throughout the school, and I expect the same type of respect from others. We cannot control what others may think or their beliefs, nor do we want to. But I will not have this type of atrocity taking place without having my voice heard.

My daughter has my permission, if she sees these posters around school, to put up her own. I challenge the principal to say one thing about this. I guarantee you do not want a religious war taking place, as I have God on my side and you’ll lose.

How ignorant is this parent? And not just because he got the name of the group wrong…

Kids are typically not allowed to hang up their own posters in a high school. Only administration-approved posters are allowed to be hung up. Students are not allowed to touch these posters. if a student was suspended for ripping one down, he should be punished for it. And if Allen’s daughter wants to put up posters for a Catholic club, she should be allowed to do that, too.

(If you look at the poster Skyler put up, you can see just how non-offensive it is.)

Skyler has courage and I hope his group takes off. I also hope he takes the high road and invite some of these Christians to his group’s meetings so they can have a real discussion and debate religious topics. That’s not something you’ll see a lot of Christian groups doing at any school.

January 11, 2010 Evansville, Indiana: Hotbed of Atheism?
Browse Our Archives
What Are Your Thoughts?leave a comment