Brainwashing Children with Virgins and Honey

Here’s a disturbing way to start your day.

Recently, in Pakistan, a suicide bomber training facility was discovered. Inside, children ages 12 to 18 were trained to become martyrs for the Islamic faith. 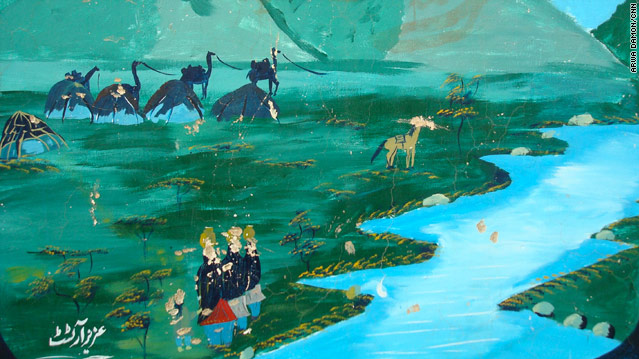 This picture, which was on one of the walls of the facility, shows a river full of milk and honey as well as the virgins the children will receive in heaven. I repeat: they’re telling 12-year-olds about the virgins waiting for them in heaven.

Where do these kids even come from?

The children were from the local area. [Brigadier Sarfraz Satter] says the parents would send them thinking they were getting an education and, more importantly, free food.

“But they don’t know what kind of religious education their child is being put through.” Satter says, acknowledging that for the next phase of operations to succeed, there has to be a focus on education. “When we start our rehabilitation, we have to reopen schools to stop them [the parents] from sending their children into the wrong hands.”

As we all know, it’s very easy to deceive children into thinking that whatever an authority figure tells them is true. This compound was no exception:

[Expert Zahid Hussein] says it’s a complete distortion of Islam, but one that the children fervently believe.

“They are also led to believe that the Muslims who are killed in suicide bombings, they will go to heaven as well. So that is a very powerful instrument of brainwashing,” he adds.

“Almost 90 percent of suicide bombers, if you look at their profile, are 12 to 18 years old,” Hussein says.

This brainwashing compound is gone, but I’m afraid that many more like it are probably still out there.

How do you fix a problem like this? I doubt it’s feasible to close down every single compound like this — that effort might be futile — but we can try to educate moderates Muslims about what is going on in the name of their faith in the hopes that they will take a stand against the extremists. I have doubts about how successful that would be, but I think it’s the only realistic option.