Some Christians are spoofing trademarked logos to make cheesy Jesus-y knockoffs. I don’t know what’s worse: that they lack any creativity or that anyone would actually buy these…

American retailers sell about $4.6 billion worth of Christian products annually, and some are spoofs or spinoffs of commercial logos or brand names. Many such goods are illegal, trademark attorneys say, but companies often are unaware their names are being copied or don’t put up a fight for fear of being labeled anti-faith.

There are “iPray” hats to wear while listening to your iPod, and the logo for the popular “Rock Band” video game was tweaked for a Christian necklace with a pendant shaped like a guitar pick. Preachers are even in on the act: They can buy materials for sermons based on popular TV shows including “Lost” and “Survivor.” 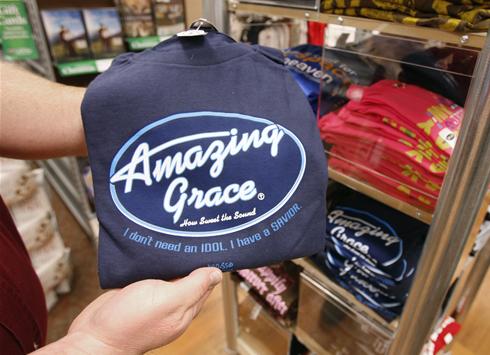 Not everyone finds these amusing:

Church marketing consultant Brad Abare has seen tons of such stuff and doesn’t like it. He’s even come up with a name for some of it: “Jesus Junk.”

“We think it’s just dumb. It’s not a true reflection of creativity,” said Abare, of the nonprofit Center for Church Communication in Los Angeles.

Abare, the church marketing consultant, just wishes Christians would pay more attention to the commandment “Thou shall not steal.”

“The whole claim for Christians in general is that God is the source of all creativity,” he said. “I think there’s something to being original that will speak to people in a way that we don’t have to copy.”

As the article says, if companies got their lawyers involved, these ripoffs would stop. Unfortunately, some of them are afraid to appear anti-Christian. I’m not sure which companies those are, but since when do companies allow intellectual property to get trumped by Jesus?

It’s not anti-Christian to protect your trademark — it’s the law and Christians shouldn’t be getting special exemptions.