The Freedom From Religion Foundation had put this sign up in front of the Illinois Capitol building in Springfield:

It turns out a conservative candidate for Illinois comptroller, William J. Kelly, was offended by the idea that anyone could disagree with him so he tried to take matters into his own hands: 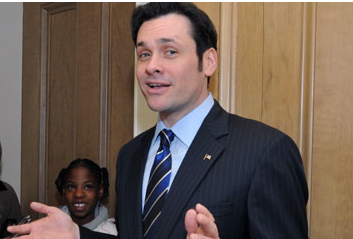 William J. Kelly announced Tuesday that he planned to take down the sign put up by the Freedom from Religion Foundation, and on Wednesday, he tried to make good on his plan.

But Kelly said when he turned the sign around so it was face down, state Capitol police were quick to escort him away.

Illinois Secretary of State’s office spokeswoman Henry Haupt said Kelly was escorted from the rotunda by state Capitol police, who briefly detained him, wrote an incident report, and directed him to leave the building.

Can someone ask Kelly what his reaction would be if we treated the Nativity scene the same way he treated the atheist sign?

Dan Barker, co-president of FFRF, was there with a lovely soundbyte:

“We atheists believe that the nativity scene is mocking humanity,” by suggesting that those who do not believe in Jesus will go to hell, Barker said. “But notice that we are not defacing or stealing nativity scenes because we disagree with their speech.”

Kelly, by the way, is a guy who says he’s going after the “beer and pizza vote” on his personal website. I’m pretty sure the beer and pizza types disapprove of his vandalism of an atheist sign.

December 24, 2009 Illegal Jesus Junk Sells
Browse Our Archives
What Are Your Thoughts?leave a comment