Joseph and Mary, Lying in a Bed… December 17, 2009 Guest Contributor

Joseph and Mary, Lying in a Bed…

A billboard about religion is causing controversy and, this time, atheists have nothing to do with it: 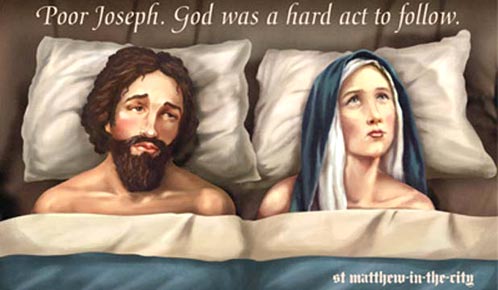 This billboard went up in New Zealand, courtesy of the St Matthew-in-the-City church. They say they put it up to encourage dialogue with non-believers.

I’m not sure how that billboard is going to make me believe the Bible, or go to church, or get closer to a god, or anything like that… but I’m amused, nonetheless.

The Catholics? Not so much.

But the city’s Catholic diocese is not impressed, saying the implication that Mary and Joseph had just had sex was “disrespectful” and “offensive” to Christians.

Spokeswoman Lyndsay Freer told the New Zealand Herald it was particularly inappropriate given the inference was wrong.

“Our Christian tradition of 2000 years is that Mary remains a virgin and that Jesus is the son of God, not Joseph,” she said.

I don’t actually understand the controversy.

Joseph and Mary were married, so presumably they had sex, right? Even if it wasn’t their sex that conceived Jesus, is it wrong to think they could lie in bed together? Mary wasn’t a virgin for life, was she?

(On a side note, look at Joseph in the picture. How could Jesus not be his son? This would be an open/shut case on Maury.)

Now, stick a Viagra symbol on this billboard and I’ll understand the uproar…

(Thanks to David for the link!)

December 16, 2009
"His Dark Materials" Trilogy on Indefinite Hold?
Next Post