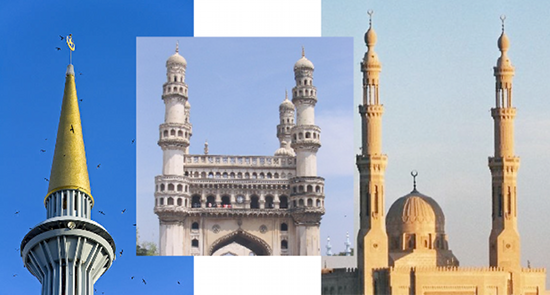 They’re the tall spires with cone-shaped, sometimes-bulging tops often seen on mosques and other pieces of Middle Eastern architecture.

There must be something wrong with them, though, because yesterday, they just got banned in Switzerland… via a nationwide referendum.

The proposal had been put forward by the Swiss People’s Party, (SVP), the largest party in parliament, which says minarets are a sign of Islamisation.

It’s also worth noting that if a population-driven initiative like this one is passed, a court cannot overrule the decision.

The argument against the minarets seems to be straight-up Islamophobia — a fear of Muslims and (more specifically) extremists.

“My first reaction is one of surprise and disappointment,” Babacar Ba, the Geneva ambassador of the Organisation of the Islamic Conference (OIC), told swissinfo.ch.

“It is a bad answer to a bad question. I fear that this kind of thing is simply a gift to extremism and intolerance.”

“I think we must be very vigilant in the face of the upsurge of islamophobia,” he added. “This vote is an open door to the dangerous process of calling fundamental freedoms into question.”

It doesn’t make sense to me, either. There are plenty of problems with Islam, like following Sharia law… but these are architectural flourishes are hardly going to make a difference in fixing anything. It’s not like they’re a danger to people standing underneath them, nor are they some sort of “bat signal” for terrorists. If anything, the decision just gives radical Islamists another reason to hate the Westernized world.

Oskar Freysinger, a politician who wanted this ban to pass, thinks this is all for the best:

“I would like to say to all the Muslims listening that this will in no way change their right to practise their religion, to pray or to gather [in mosques],” he said. “However, society wants to put a safeguard on the political-legal wing of Islam, for which there is no separation between state and religion.”

He’s right that the ban won’t change a Muslim’s right to practice his/her faith… but then I wonder why it was so important to get the ban at all. Also, to my knowledge, Switzerland wasn’t about to be overtaken by Fundamentalist Islamists… did I miss something here?

The entire government wasn’t in support of this ban — just one large group of politicians. But their influence was strong enough to convince most Swiss voters to make the wrong decision.

It’s also worth noting that other religious groups were against the ban as well.

In a statement, the conference said that like church steeples, minarets marked a religion’s presence in the public domain.

The bishops said that a ban would hinder interreligious dialogue and added that the construction and operation of minarets were already regulated by Swiss building codes.

“Our request for the initiative to be rejected is based on our Christian values and the democratic principles in our country.”

I would hope atheists denounce this decision, too.

We can take a stance against religious belief and the danger of religious extremism — but while we fight for our right to have freedom from religion, we can’t forget how important it is to also be supporting freedom of religion.

Reader Gavrilo adds in an (edited) email that this may all be moot:

Switzerland already has very strict spatial planning laws, which make it so nobody can start erecting 100m tall monstrosities anywhere. Basically, this law cannot have any practical application whatsoever; it’s just a cry of anger and rejection at the face of the rising Muslim minority in Switzerland.

I worry this decision will lead the country down a slippery slope where any minority religion çan be picked on for no good reason. The rest of us need to be defending their right to practice their beliefs as they wish even if we want to denounce the entire practice in the first place.