Our atheist billboards and bus ads have appeared all over the place, but there’s a certain repetition to the designs.  In case you wanted something new, your non-prayers have been answered: the American Humanist Association is sponsoring a new nation-wide campaign with the words “No God? …No problem! Be good for goodness’ sake.” 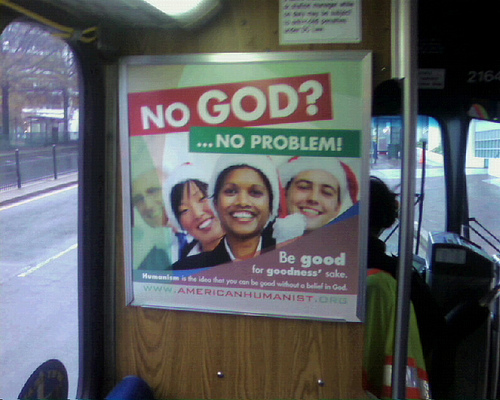 I absolutely love the line “be good for goodness’ sake” and I’m glad they kept it from last year. The only downside is that the apostrophe is easy to miss, and when I worked for the AHA last year I had to constantly point it out to people. Brilliant line in a book or as a spoken slogan, but perhaps not practical on fast-moving busses and in trains, where people won’t always pay enough attention to the nuance.

The other faux controversy last year’s ads stirred up was that we used Christmas themes. One news anchor accused us of using a “fake Santa” (well, the REAL Santa was busy at that time of year!). Bill Donohue took it as a direct attack on Christianity and told me that if we had any guts, we would go after Islam. The new ads keep the Santa hats and use red and green, so we’re sure to see the same accusations and comparisons to grinches.

AHA board member Herb Silverman (also president of the Secular Coalition for America) preempted those responses in his On Faith piece:

There undoubtedly will be some Christians who perceive this humanist holiday celebration as part of the “war on Christmas,” perhaps even more sacrilegious than wishing someone “Happy Holidays.” Paranoids will be paranoids. Should we desist from promoting our viewpoint to spare their feelings? Of course not. They’ll likely hate us and our philosophy no matter what we do, so we should just be ourselves.

Very few of our ads have been offensive or edgy, and yet there’s been a backlash against every single one. It doesn’t matter what we say, people will take offense.

Given the fact that people will take umbrage at things I consider harmless, should we bother to be polite? I think so. People are getting offended at the content of our message – there’s no getting around that. But if we can avoid offending people with our style as well, let’s do what we can. Spreading our message does real good in communities and in the national dialogue about religion in America.

I think we should be as nice as we can without compromising our message. Do you agree?
(Image from the AHA’s Flickr site)

November 25, 2009
Georgia Town Debates Saying No to "So Help Me God"
Next Post