I’m (Not) With Stupid

Recently, Fred Phelps and the other nuts at Westboro Baptist Church protested near a midwest high school for no good reason (other than, perhaps, the existence of liberal faculty members…?).

I’ve blurred out the school’s identifying information in the pic below, but you can see that several of the high school students staged a counter protest, which I think is just great. 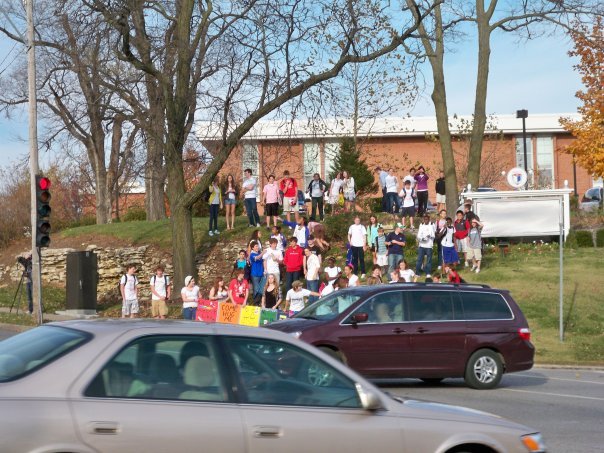 It’s hard to see, but a few students are holding up a poster which says “Come Hug Me.” The full message contains a $5 offer to any of Phelps’ people who will come get a hug from a gay student.

No one took them up on the offer…

That picture comes courtesy of a reader named Sarah, who attended that high school years ago and stopped by when she heard Phelps’ people were coming for a visit.

She came in proper attire, too.

The picture below shows Sarah (right) and her friend Kat (left) wearing well-stated “I’m Not with Stupid” shirts as they stand near a member of the Phelps Clan: 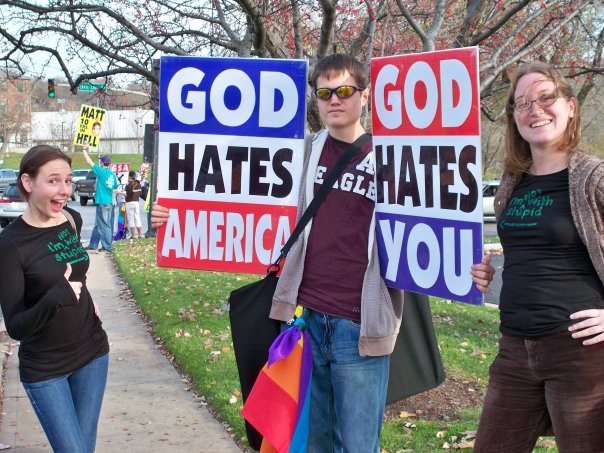 I don’t know why that guy is wearing a rainbow-y thing, but Sarah suggests it may just indicate a connection between the signs and homosexuality.

Doesn’t it give you a warm, fuzzy feeling to know that so many young people realize how crazy Phelps and his clan’s beliefs are? The Westboro group’s views regarding homosexuality are only slightly more extreme than those of the Christian Right in general.

These are the same students who will eventually vote and help us get marriage equality for all throughout the country. That time isn’t as far away as the conservatives think. Hallelujah.

November 15, 2009
The Intellectual Capability of Ray Comfort and Kirk Cameron
Next Post