Learn to be Lucky: What Luck Really is November 5, 2009 Dr. Denise Cooper-Clarke

Learn to be Lucky: What Luck Really is 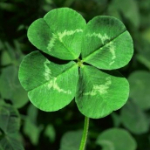 Even for those who don’t believe in luck, we know that some people feel luckier than others. Some people stumble across good jobs, good dates, and good opportunities for no discernible reason.  What can you do to become luckier?  According to this 2003 article I just came across, you listen to Richard Wiseman (who, by the way, has a great blog).

Personality tests revealed that unlucky people are generally much more tense than lucky people, and research has shown that anxiety disrupts people’s ability to notice the unexpected.

My research revealed that lucky people generate good fortune via four basic principles. They are skilled at creating and noticing chance opportunities, make lucky decisions by listening to their intuition, create self-fulfilling prophesies via positive expectations, and adopt a resilient attitude that transforms bad luck into good.

My one comment (besides, “isn’t that so interesting?”) would be that he didn’t mention the necessity of preparation.  I imagine that if you prepare for a variety of circumstances, you’ll be able to get the best outcomes and seem lucky.  Bad events won’t seem as unlucky and you’ll be ready to take full advantage of the good events.

Wiseman was even able to train people to become (feel) luckier!

I asked a group of lucky and unlucky volunteers to spend a month carrying out exercises designed to help them think and behave like a lucky person. These exercises helped them spot chance opportunities, listen to their intuition, expect to be lucky, and be more resilient to bad luck.

One month later, the volunteers returned and described what had happened. The results were dramatic: 80 per cent of people were now happier, more satisfied with their lives and, perhaps most important of all, luckier. While lucky people became luckier, the unlucky had become lucky.

Having a “lucky” talisman can give people confidence – and thus lead to better results.  It becomes a self-reinforcing and helpful belief.  I might hesitate before bursting that bubble by arguing with them that luck doesn’t exist.  But if “luck” is just a combination of learnable skills, we would be empowering people, not breaking a spell by alerting people to the fact.

I found this article fascinating. Of course, I always love it when we come up with rational reasons for things that we previously considered out of our control, but it’s particularly relevant to me right now.  I’m in the process of looking for a new job (update on that soon) and trying to have a “resilient attitude that transforms bad luck into good”.

Isn’t it “lucky” that I found this article when I did?