Einstein and God on a Pumpkin November 2, 2009 Dr. Denise Cooper-Clarke

Einstein and God on a Pumpkin

My dad puts special time and talent into carving unique and beautiful pumpkins each year.  He bases his design on a specific story, sketches out an elaborate image, and uses special carving tools instead of a knife.   I thought that looking at pictures would be a nice way to start the week.  This pumpkin is actually from a couple of years ago, but it seems particularly appropriate for us. All descriptions and pictures were taken by my dad, Barry Galef, and more pictures from other years’ are up on his website.

As part of a charity auction, my dad was challenged to show all of 20th century physics on his pumpkin. My dad rose to the occasion:

The last few years I’ve donated a Jack O’ Lantern to a charity auction. A friend was the highest bidder this year, and I offered him the chance to weigh in on the design. He said I’d done enough old folk tales, and wanted something modern. “Oh, like Kafka’s ‘Metamorphoses?'”No. I want . . . the whole history of 20th Century Physics! It must have both the special and general theories of relativity, quantum mechanics, Schrodinger’s Cat, and Einstein insisting that God does not play dice with the universe!” At first I thought he was out of his gourd, but later realized he was truly inspired. I proceeded to try my best. 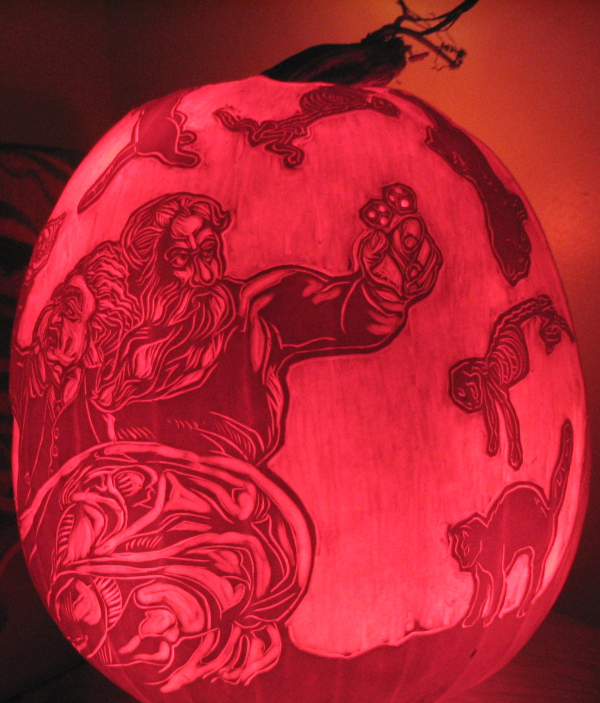 In my illustration, I show God the Father as pictured by Michaelangelo along with Albert Einstein. God is tossing the dice — but every face on his dice has only a single pip! Thus, any way they fall, we end up with snake eyes. So Einstein is both right and wrong: the dice are tossed, but God has no doubt of the result.

Einstein is shown as God’s right-hand man, perhaps an unintended blasphemy. Albert is flipping Schrodinger’s Cat, in a reference to the randomness of flipping a coin.

My take on Schrodinger’s cat is that (1) even before we open the box, the cat itself observes whether it’s been poisoned or not, thereby collapsing its own probability wave, and (2) unlike a flipped coin, which lands on heads or tails by random chance, a flipped cat always lands on its feet!

You could say that I’ve left out a lot of 20th century physics. In response, I can claim to have included dark matter, dark energy, and black holes in the design. You just can’t see them. And I do show the curvature of space.

I give my dad a lot of credit for my love of science and my cleverness, and I think this pumpkin is an excellent illustration of why.  It’s a shame he didn’t pass on his artisic talent as well…

November 2, 2009
The Ethical Humanist Society of Chicago vs. Sunsara Taylor
Next Post