A Little Holiday Co-opting of My Own November 1, 2009 Richard Wade

A Little Holiday Co-opting of My Own 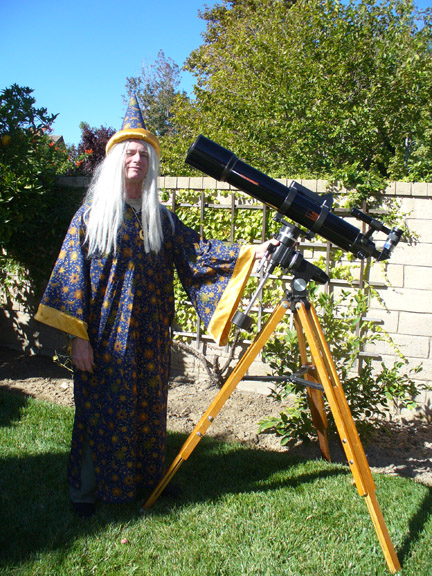 The various holidays that enliven the year have all gone through a complicated process of being co-opted. Each successive culture that has conquered or prevailed over a previous culture has adapted local holidays to fit its own agenda, drawing the conquered populace into participating in the new culture. So local animist holidays were co-opted into Celtic forms, then Roman forms, then Roman Catholic forms, then Protestant forms, and in the United States, the latest co-opting has been into Capitalist forms.

Since it’s such a thoroughly co-opted holiday, I’ve been trying a little co-opting of my own, turning a tiny part of it into Turn Away From Superstitious Nonsense For a Brief Moment and Be Amazed at the Real Universe Night.

It’s the only night of the year when thousands of kids and their parents are outside in the dark. So each year, weather permitting, I set up one of my telescopes in front of my house and show them one of the wonders of the night sky. I dress up in a classic wizard costume because part of the co-opting process is to resemble the previous culture’s holiday.

Last night, Jupiter was very well placed high in the southern sky, and the full moon was far to the East. The weather was perfect. About 200 little kids dressed as princesses, ghouls and ghosts came by with their parents, as well as teens in their inexplicable costumes, all on their quest for candy. Several said, “Hey it’s the telescope man!” They remembered me from previous years. That feels good.

My wife handed out the goodies while the kids and grownups took turns viewing Jupiter, a pale disk with tan stripes bracketed by two pairs of tiny moons on either side, all lined up straight. They all seemed to enjoy it, giving exclamations of astonishment. Even the few teens who were feigning being jaded brightened up and got excited.

I told them a few interesting facts just to plant the seeds of the love of science. The bit of information that was the biggest hit was that the planet is so far away it takes the light about 40 minutes to reach us, so we see it as it was and where it was 40 minutes ago. A telescope is a time machine that looks into the past. The adults showed the same expression of awe as the youngsters.

I really love doing things like this. If there’s a secular version of a “calling” this is mine. There is so much wonder, mystery and beauty in the real universe, the real world all around us. So much to inspire our best emotions, our best thoughts and our best actions.

I wish you all a very happy Reality Day. That’s any and every day.

October 31, 2009
LAPD Cuts Ties with Boy Scouts Because of Their Bigotry
Next Post