You remember the “atheist” mailer sent out by Albuquerque City Councilor Don Harris when he was trying to smear his opponent David Barbour by outing him as a capital-A atheist and criticizing his donation for a science scholarship? 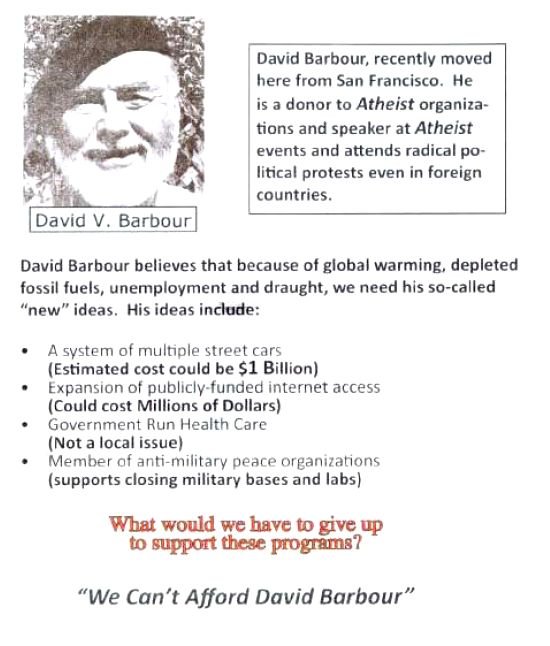 In case you missed it, Harris issued an apology for his actions on this site. He had some issues with how I approached the issue, but he did acknowledge doing something he shouldn’t have and I sincerely believe he feels remorseful about it.

The New Mexico Independent has a follow-up article on the whole debacle.

In e-mails to readers of a popular Atheist blog, City Councilor Don Harris recently apologized for attempting to use his opponent’s religion against him, saying he had “learned a great deal,” from the experience.

In an interview with the Independent, Harris said that once NMI’s stories about his mailer were picked up by FriendlyAtheist, he got “a fair bit of e-mail.”

“Although the safest course would be to leave it alone, I felt compelled to at least write the people back who took the time to write to me, and to post something on their site, which several of them asked me to do,” Harris told the Independent.

“I was reminded that the decisions that one makes when running for office and being in office are not simple ones, and they can have unexpected consequences. Being true to one’s own principles, while respecting the principles of others’, as a public official is a delicate balance. Political campaigns are by definition divisive; then after the election some healing and mending fences may be in order. That was the case here,” he wrote, adding, “I’m just doing the best I can.”

The article also says I “did not reply to an e-mail from the Independent requesting an interview.” Not sure what happened there, since I would’ve replied to that. I didn’t get their email, though. (I sent them a message letting them know that.)

I’ve learned a few lessons from this whole back-and-forth with Harris:

Many thanks to all of you who didn’t let this story die and who carried on email conversations with Mr. Harris during this process.

October 29, 2009 Can You Be Good Without (Belief in) God?
Browse Our Archives
What Are Your Thoughts?leave a comment