Another Atheist Billboard is Vandalized

A billboard put up by the Freedom From Religion Foundation was defaced yesterday: 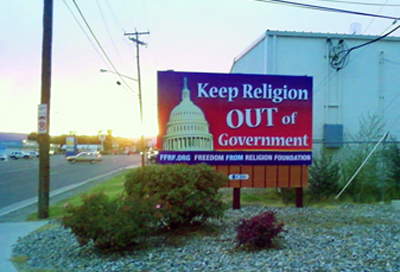 FFRF is offering a $1,000 reward to anyone who has information about the vandal that could lead to the person’s arrest.

This is a hate crime directed both at the nonreligious and at gays — it’s a perversion of our message honoring a precious constitutional principle,” said Foundation Co-President, Annie Laurie Gaylor.

“The hate crime shows how important it truly is to ‘keep religion out of government’ — to keep homophobic dogma and blasphemy laws off of our civil statutes.”

It’s a disgusting crime and it occurs just a week after another billboard was defaced in Idaho.

You know, if you don’t like the message, you can get your own billboard and put up a counter-message. No one is stopping you.

But there’s no need to take down perfectly reasonable messages.

Keep religion out of politics? People can be good without god? Those are slogans even Christians ought to be agreeing with.