Not interesting: A Christian group (The Alpha Course) put up an online survey asking visitors if they believed in God.

Not interesting: The poll was crashed by atheists.

Not interesting: Atheists won, and the poll overwhelmingly swung in our favor (Most respondents said, “No,” God doesn’t exist).

Interesting: This is news to anybody. 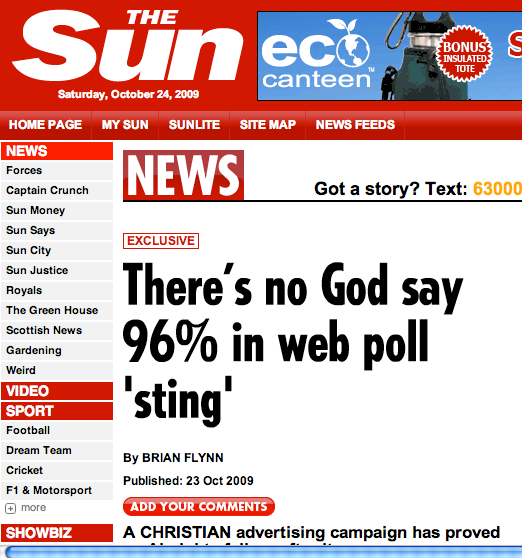 More than 88,000 responded to the posters and adverts.

But embarrassingly the poll on the Christian website backfired with a massive 96 PER CENT insisting there was no God – and only three per cent saying they did believe.

Spokesman Mark Elsdon-Dew added: “I don’t think this is indicative of people’s faith in this country.”

So the accuracy factor may be off…

In the meantime, I’ll settle for the amusement factor.

(Thanks to Tony for the link!)