Here’s an interesting twist on a common question.  I’ve been asked several times whether I could date a religious girl. I can speak from experience (though with a sample size of one) that it didn’t work out well. She told me that her faith was a big part of who she was, and asked that if I didn’t respect her faith how could I respect her?  (For the record, an uncomfortable silence ensued before I asked “Is it really that big a part of you?”  We didn’t date long.)

Fortunately for me, it’s not an issue with Lisa, my current girlfriend.  She’s a member of the Secular Student Alliance, helped found two secular clubs in college, and is generally amazing.  Here’s an illustrative picture of her at the Maryland Renaissance Festival: 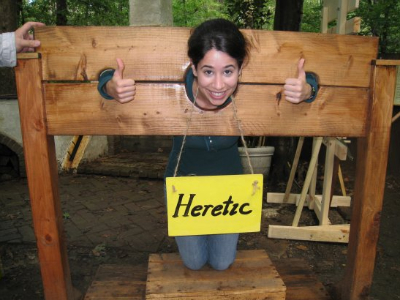 I don’t think that I would immediately reject such a girl, but I don’t know if the relationship would last in my case.  I consider certain traits central to my identity – my skepticism, my rationality, my willingness to accept what I think is true rather than what I wish were true.  If a girl has no problem dating a religious person, how much could she value those traits in me?

I’m not talking about a girl who might take issue with religion but is willing to overlook it for other reasons.  There’s a difference between a girl who is willing to date a religious person and a girl who has no problem with it.  It becomes a matter of degree: how much does she value rationality?

What do you think? Of the question, not of Lisa, who I already know is great.

October 21, 2009
The Physical Embodiment of Catholic Paranoia
Next Post