In Moscow, Idaho today, a billboard placed by the American Humanist Association was vandalized:

It’s really incredible what little you have to do to offend someone.

This particular billboard was simply saying there are those out there who are good without a god. What sort of person do you have to be to see that as a slap-in-the-face to your own religious beliefs?

At least the AHA has a sense of humor about it:

“I knew there would be some disagreement with the billboard’s slogan, but I do wish that those who objected would have opened a dialogue with us rather than trying to stifle our message and damaging property,” continued Speckhardt. “A phone call would have been much nicer.”

“If we replace the billboard our next slogan might read ‘Being good without God clearly not for everybody’,” Speckhardt joked.

Meanwhile, the Chicago Coalition of Reason’s billboard has been up in the city for just two days… 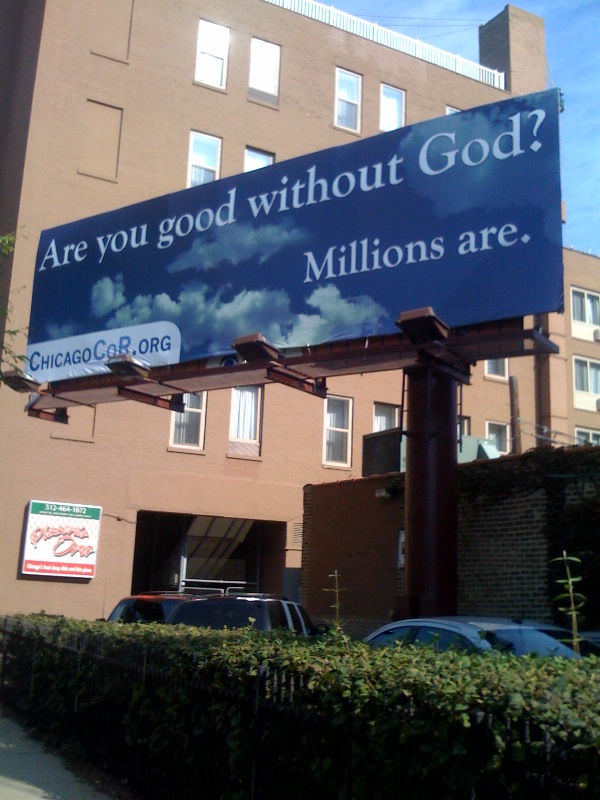 … and the reactions are running the spectrum.

Since I’m fortunate to be on the receiving end of all the email sent to the ChicagoCoR website, I thought I’d share some of the comments I’ve been seeing.

Again, just note what the message is:

“Are you good without God? Millions are.”

It’s a callout to other atheists.

But apparently, that’s not how everyone sees it…

I wonder why a group of self-proclaimed atheists would feel the need to push their point of view onto others? Is this not one of the fundamental problems with established religion? How is your organization furthering the atheist agenda? Let’s face it, you’re just trying to incite anger. Why don’t you do us all a favor and keep your non-beliefs to yourself, just as I would like established religion to keep to themselves.

If we wanted to incite anger, there’s a whole slew of other slogans we could have used. This one was the least offensive out there.

There seems to be three words left off. The billboard should read: “Are you good without God? Millions are — until the judgment.

… Why does the organization feels the need to plaster anti-god adds all over Chicago and the rest of the United States. I am not condemning or judging you, because that’s not my job. I understand that there are people out there that are atheist, and that’s their own choice, but why blatantly throw it in America’s face? Is this some vendetta against religion, or some kind of teenage rebellion that was never grown out of?…

I responded back to a couple of these by posing a few questions of my own:

Christians have TV stations, churches on every corner, advertisements on seemingly every highway in the country… all we atheists did was put up a few billboards. And you’re singling *us* out for “throwing it in America’s face”?

On the flip side, some people have been very supportive of the billboard.

… I want to thank you for forming a community of like minded individuals. It’s time we consider the human value of our existence with what’s in front of us, here and now. I think what you’re doing is beautiful. I’m excited for what we’ll see in each others eyes when we’re alive, with each other now, without the story of what might be.

These billboards are up for those last couple people — the kind who also don’t believe in God but who rarely see atheism expressed in public.

Ideally, they’ll go to the websites on the billboards, join a member group, attend an event, meet some like-minded people, and no longer feel alone in their beliefs.