Black Jesus in an Electric Chair + a Crucified Gorilla

I rarely understand modern art, but I appreciate whenever traditional views are challenged, and this will certainly do the trick.

Paul Fryer‘s newest work brings together race, religion, and a gorilla… on a crucifix: 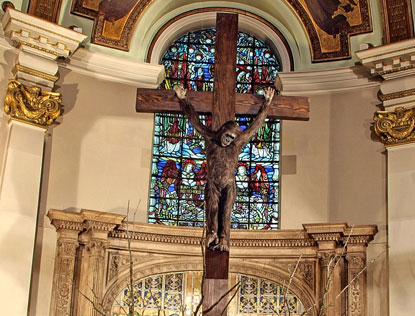 [Fryer] insists he wants to highlight the plight of the Western Lowland Gorillas, and to challenge the Christian notion that animals do not have souls. But he does not want to cause offence.

Right… I’m sure no one will take any offense at all. (Artists know damn well when their work will offend somebody, so they need to stop saying otherwise. It’d be more honest if they said they wanted to challenge peoples’ mindsets and get them to think differently.)

Just to be clear, Fryer is not calling Jesus a gorilla.

(Though, from an evolutionary perspective, using that image to say we share a common ancestor would be very interesting…)

For his next piece of work, Fryer crucifies Jesus in slightly more modern times. There’s no cross. Instead, we see Jesus in an electric chair.

Oh. And Jesus is black. 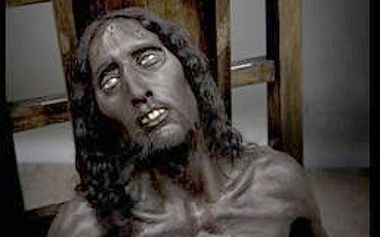 In his contemporary version of a Pieta, a life-like black Christ is depicted in an electric chair. An earlier version, featuring a white Christ, provoked protests in the French town of Gap earlier this year.

“If they had had the chair in Christ’s time, people would be wearing little electric chairs now,” Fryer said.

That’s a Lenny Bruce line, by the way.

It’s all not-so-surprisingly controversial. You expect Bill Donohue will flip his shit in 5… 4… 3…

I never understand why people get offended by things like this. It doesn’t change or diminish what you believe happened. It’s not inciting violence nor is it directly or indirectly hurting anyone. It’s just one person’s reworking of several well-known themes.

If you’re offended, then criticize the supposed artistry. Don’t get offended because you dislike the interpretation. Just because you find something sacred doesn’t mean the rest of us have to follow in step.

What does Fryer say about his perceived “attacks” on religion?

… The symbols and iconography belong to me as much as anyone else. They are mine to do with as I see fit. I mean, what the fuck does anything have to do with anything? Why does everything have to be explained? Okay… I’ll try. The figure of Christ isn’t just in the electric chair he’s starved and he’s black. Hundreds more black people have been executed in the chair than white people. More black people starve to death than white people by what you could call a significant margin too. We still execute people 2,000 years after Christ’s death. And he was black too. Back then the guy must have thought he was wasting his breath. God only knows what he would think if he saw the world today. It’s just as well he was resurrected because if he was in the grave he’d be turning in it. As for the apes, at the rate we’re killing them all the lowland gorillas will be dead by the year 2020. Do animals have souls? What a question. We should be asking the same question of ourselves.

The exhibit featuring these works and several more is called The Age of the Marvellous and it can be seen at Holy Trinity Church, 1 Marylebone Rd, London, NW1 4DU through Thursday.