Another Reason Not to Shop at Walmart October 14, 2009 Guest Contributor

Another Reason Not to Shop at Walmart

Christian video games are bad enough as it is. So often, they’re low-quality versions of real entertainment. (Remember Guitar Praise and Dance Praise 2 — The ReMix?)

But if you’re trying to sell the Jesus kitsch, you might as well go where your customers are:

That’s where Left Behind Games Inc. is now going to be selling their goods.

Christian products have gained popular acceptance in the music and book sections of retailers over recent years. The newest Left Behind and Charlie Church Mouse PC video games are among three titles being piloted in approximately 100 Texas Walmart stores for determining customer interest.

The demographics in Texas make it an ideal testing ground for Left Behind PC Games where there are over 23,000 churches… Texas ranks first in the nation in the number of Evangelical Protestants (over 5 million), second in number of Mainline Protestants (over 1.7 million) and third in number of Catholics… Troy Lyndon, CEO of Inspired Media says, “The US market for Christian video games could reach $648 Million within the next five years based upon just 3% of video game sales being in the Christian segment.” This projection is based upon the prediction by PricewaterhouseCoopers that the sale of video game software will reach $21.6 Billion by 2013 in the US alone.

I don’t know whether to cry for all of Texas or for the children who will end up playing this garbage.

For some reason, I just don’t think kids are going to line up for miles for games like this one: 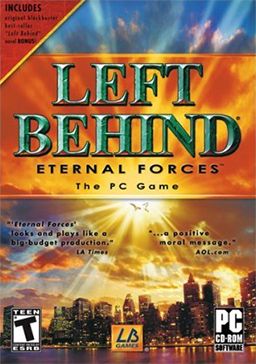 The purpose of that game, by the way?

You are in control of the gospel singers and missionaries, and you must defeat the secularists, devils, and rock stars. By defeat, they mean you must convert them by “raising their spirit level.”

Personally, I’d prefer the Christian version of Mario Kart. That would be awesome.

I’d totally take Judas out with a red turtle shell.

(Thanks to CarolAnn for the link!)

October 15, 2009 Finally, Some Good News for Simon Singh
Browse Our Archives
What Are Your Thoughts?leave a comment