Reader Doug happens to be on the mailing list for Answers in Genesis. So he’s been getting their newsletter for a little while now. A recent article stood out to him. It was about Camp Quest, the summer camp for children of atheist parents.

You can read the article by clicking on the images below or just go here for the online version: 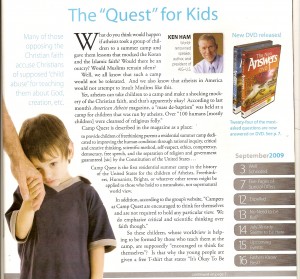 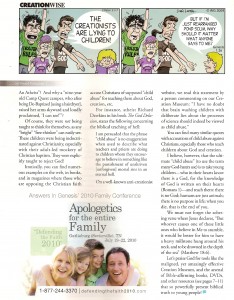 Gotta love the comic on the second page…

It’s notable that the article contained some glaring errors. (Some of which have since been rectified in the online piece with footnotes.)

For example, the article mentions this:

So these children, whose worldview is helping to be formed by those who teach them at the camp, are supposedly “encouraged to think for themselves”? Is that why the young people are given a free T-shirt that states “It’s Okay To Be An Atheist”? And why a “nine-year old Camp Quest camper, who after being De-Baptized [using a hairdryer], raised her arms skyward and loudly proclaimed, ‘I can see!’”?

Of course, they were not being taught to think for themselves, as any “bright” “free-thinker” can easily see. These children were being indoctrinated against Christianity, especially with their adult-led mockery of Christian baptism. They were explicitly taught to reject God!

I shot the video of that nine-year-old girl saying what she did. You can see it here:

Does that look like an outdoor camp? Of course not. It took place at a party last year during which participants could voluntarily get in line for a de-baptism

AiG eventually realized this and issued this clarification:

Since this article was posted, we learned that the “mass de-baptism” did not occur at Camp Quest but at a different venue in Ohio. We inferred from a statement in the American Atheist article referenced above — that a “nine-year-old Camp Quest camper who, after being De-Baptized, raised her arms skyward and loudly proclaimed, ‘I can see!’” — that the sacrilege occurred at Camp Quest. This belief was fostered by noting that the AA article featured a photo of the founder of the Camp Quest movement conducting the de-baptism and also because photos depicted a rustic camp-like setting — all suggesting that this event was held at a camp that Camp Quest has become known for hosting. So, even though the young girl was described in the article as a Camp Quest camper (and thus we took the article to say that the de-baptism happened at Camp Quest), we made a logical yet inaccurate inference, and, so, we regret that in a fallen world, fallible people can make inadvertent mistakes like this. For this reason, we wish to retract the inference we had made that the incident took place at Camp Quest.

Good for him for issuing a retraction.

But that’s the crux of the entire piece. They claim that Camp Quest is all about childhood indoctrination into atheism, yet the primary examples they give are all wrong. There’s no mass de-baptism at the camp — not even in jest. Nor did Camp Quest issue shirts reading “It’s Okay To Be An Atheist” as the AiG piece claims.

This is typical of Ken Ham and Answers in Genesis. They latch onto something minor which can easily be explained by those with more knowledge on the subject and stretch it into some major condemnation of non-Christian belief. And it’d be laughable if it weren’t so serious.

What AiG needs to do is print the footnote explanation in their next newsletter.

(I’m still looking forward to the clarification which states they were wrong about the entire Creation Museum.)

For the record, Amanda Metskas is the director of Camp Quest. Here’s what she told me about the camp in response to Ham’s article:

We definitely do not debaptize children at Camp Quest. We don’t label the campers of Camp Quest with a worldview, and that includes avoiding rituals like debaptism at camp. Besides, if you know anything about our demographics, a fair number of our campers were never baptized in the first place, so debaptism isn’t only inappropriate at camp, but also largely unnecessary!

I personally think that both baptism and debaptism are more appropriate for adults. One of the problems with baptism is that it is a decision often made by parents for children before the children are old enough to consent or understand the ritual they are participating in. Debaptism is a humorous response to that very problem by letting people revoke their participation in a ritual that they never consented to in the first place.

Ken Ham also claims that we have shirts that say “It’s okay not to believe in God,” which is not true. That sentence was a comment written by an anonymous camper in 2004 on his/her camp evaluation form in response to a question asking “What have you learned at Camp Quest 2004?” Note that the camper didn’t write that there isn’t a god, just that it is okay not to believe. We aren’t trying to convert campers to a particular worldview at camp, but we are trying to send them the message that there is nothing wrong with them or with their parents for not believing in a god. In our pervasively religious culture, this is something that a lot of our campers really need to hear, and that is exactly the message that this camper got from the Camp Quest experience.

Answers in Genesis has a history of mischaracterizing Camp Quest. I think they like to make us the bogeyman to scare their supporters into donating more money or buying more products from them. In the future, I encourage them to contact us when they are writing an article, or at least do some basic fact checking before going to press. I’d be happy to be interviewed for a future AiG newsletter article that would correct some of the errors they’ve made in this article.

It’s an eloquent response from the head of the organization. I imagine she’d have even more interesting thoughts to share with Ham’s followers if he took her up on that last line.

Will he do that? I doubt it. But I’d love to be proven wrong here.

October 10, 2009 Bill O'Reilly Shouts at Richard Dawkins and Gets a Response
Browse Our Archives
What Are Your Thoughts?leave a comment