Less than I year ago, I wrote about the charity Kiva:

Kiva allows you to lend money in groups, and the Atheists, Agnostics, Skeptics, Freethinkers, Secular Humanists and the Non-Religious group has been among the most generous teams for the past year.

I am now able to say the following with great pride:

The atheist team has more members than any other group. They have 6,002 members as I write this. (Kiva Christians are in a distant third.)

The atheist team has given out more loans than any other group. They have given away 33002 loans. (Kiva Christians are in a distant second.)

The atheist team has given away over a million dollars in loans as of yesterday. (Again, Kiva Christians are in a distant second.)

It’s a beautiful sight to behold: 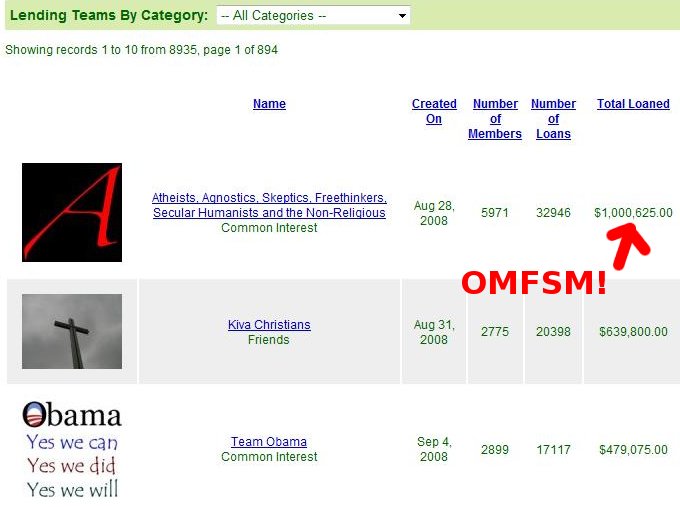 Kiva is thrilled about the milestone, too, posting a congratulatory message on their blog.

In a press release, an atheist team representative writes:

AASFSHNR, just over 1 year old, is the first group to reach $1,000,000. Despite the modest goal of $50k in four months, 10 days after creation AASFSHNR hit $10,000. As the loans were paid back, or new money was lent, the group total climbed faster and faster.

Head over to the team’s blog to congratulate them. Or, better yet, join the team, make a microloan, and help change lives because it’s the right, Humanistic thing to do.

(Thanks to Peter for the link!)

October 8, 2009
The Atheist's Guide to Christmas Now Available in America
Next Post