Should We Blaspheme? Not Always… September 30, 2009 Guest Contributor

Should We Blaspheme? Not Always…

Why do we celebrate it?

Blasphemy Day International is a campaign seeking to establish September 30th as a day to promote free speech and stand up in a show of solidarity for the freedom to challenge, criticize, and satirize religion without fear of murder, litigation, and reprisal. Blasphemy Day takes place September 30th to commemorate the publishing of the Jyllands-Posten Muhammad cartoons. The purpose of Blasphemy Day is not to promote hate or violence; it is to support free speech, support the right to criticize and satirize religion, and to oppose any resolutions or laws, binding or otherwise, that discourage or inhibit free speech of any kind.

The Center For Inquiry is running a blasphemy contest through next week to mark the occasion. All you have to do is “create a phrase, poem, or statement that would be or would have been considered blasphemous.”

Paul Kurtz is the founder and former Chairman of CFI and he thinks the contest is in the wrong spirit. I have to say I agree with him.

It is one thing to examine the claims of religion in a responsible way by calling attention to Biblical, Koranic or scientific criticisms, it is quite another to violate the key humanistic principle of tolerance. One may disagree with contending religious beliefs, but to denigrate them by rude caricatures borders on hate speech. What would humanists and skeptics say if religious believers insulted them in the same way?

It’s not just the contest that’s the problem. It’s the idea of blasphemy, used in the wrong way.

If you’re doing something blasphemous today, ask yourself these questions:

Blasphemy isn’t always bad, of course. When Jyllands-Posten published “blasphemous” cartoons about Muhammad — and a few other newspapers and magazines followed — they were doing it to support freedom of the press. A very important point was made: just because you find something or someone sacred doesn’t mean the rest of us have to follow suit. More power to those institutions which stood up to the violent protestors.

Yes, you could hold a sign that reads, “FUCK JESUS.” You could wear a shirt like this. You could paint a picture of religious deities doing all sorts of disgusting things with barnyard animals. But what would be the point?

Without a good reason, you’re not showing the general public that we ought to take advantage of our right to free speech. You’re only showing them you’re a jerk.

I’m not trying to act holier-than-thou or anything, either.

Several affiliates of the Secular Student Alliance are celebrating their own way and I support what they’re doing.

For example, At LSU, Matthew Shepherd‘s campus atheist group has a plan of action:

Shepherd said the group will hand out fliers about the Jyllands-Posten cartoons from 10 a.m. until at least 12:30 p.m., and AHA might set up a system for students to exchange Bibles for materials “promoting free thinking.”

That’s what the day should be about: opening peoples’ minds, not simply offending them for the sake of it.

Just because you can blaspheme doesn’t mean you have to blaspheme.

Kurtz wasn’t arguing against critiquing religion, though. He was against attacks on religion that had no point other than to offend. There’s a difference between criticizing what the Bible says and drawing a picture called “Jesus Does His Nails”: 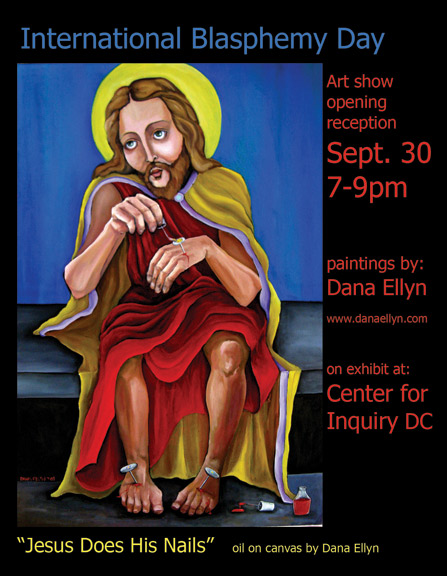 No one’s trying to censor the artist or anyone else for that matter.

Again, I think Kurtz is asking what I’m asking: If you’re “blaspheming,” are you doing it for the right reasons?

(On a side note, like Ron Lindsay, I would like to know why Kurtz is using the phrase “fundamentalist atheist”…)

September 29, 2009
Repealing the Blasphemy Law and Getting a Secular Irish Constitution
Next Post