When the “Elephant Crossing” exhibit opened at the Calgary Zoo in 2006, a private donor gave the zoo a statue of the Hindu god Ganesh — it was in honor . 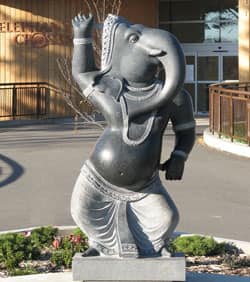 For some reason, the zoo accepted it and stripped it of “all religious symbolism.” Which is ridiculous because an elephant in that pose is itself a well-known image of Ganesh. That’s like saying someone donated a statue of a man on a cross, and the zoo accepted it because there’s no indication that it’s Jesus.

The right thing to do would be to simply remove the statue.

But the zoo isn’t doing that:

“Our desire in putting the statue here was to demonstrate to our visitors the connection between cultures and animals, much like the same way the bald eagle for example depicts the American culture, the lion Britain, the beaver Canada,” explained Grahame Newton, the zoo’s director of corporate services, on Friday.

I think the problem is simply that most people don’t have enough cultural knowledge to make the connection that the statue is considered sacred for a part of the population. They don’t know it’s a religious icon.

Meanwhile, one Christian is very angry about all this… he actually makes some sense, up until the last sentence, when he gives away his true feelings:

Jim Blake, national chair of Concerned Christians Canada, sent a letter to the zoo on Thursday, calling for the sculpture to be removed.

“The zoo is not a place of religious indoctrination, it is supposed to be a safe family environment free of religious icons and selective religious partiality,” Blake wrote.

“The displaying of different gods in a public place like this is an offence to our beliefs and does not represent the diversity of views that should be reflected.”

If the zoo wants to keep the statue and “[embark] on teaching the public about world religions, Blake suggested that the facility also erect the cross of Jesus Christ, the Ten Commandments and Noah’s Ark

“The display of foreign gods is offensive and does not reflect the views of the majority of Canadians,” he continued.

The headline at Reddit summarizes that argument perfectly: “You can’t erect a statue to your elephant god because my sky fairy will be offended.”

(Thanks to Yuri and Brett for the link!)