There are a few interesting thoughts to take from the new ARIS study on American “Nones” (people who aren’t affiliated with a particular religion*).  PZ Myers raised a point, and Hemant is posting his take a little later in the day.  I’ll try not to step on his toes, and focus on chart I found particularly interesting: 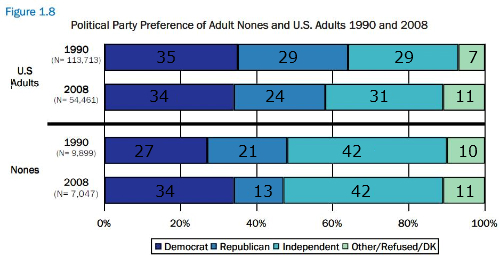 (I retyped the numbers for clarity, click for larger original)

These are the political affiliations of both the US population as a whole and the so-called “American Nones”.  American Nones were more ‘independent’ but over the last 18 years we see them disproportionately leaving the GOP.  I was talking to a reporter this morning about the findings, and suggested that perhaps the shift is due to the growing influence of the religious right on the Republican Party.  American Nones didn’t feel welcome in the increasingly religious climate.

But at the same time, we can’t be stereotyped as liberals.  We’re no more likely to be affiliated with the Democratic Party as the population as a whole is.  My guess is that we have a wide range of political views, but conservative ‘nones’ consider themselves Independent instead of choosing to affiliate with the GOP.

The lesson politicians need to learn is that when a party turns overtly religious and welcomes – nay, courts – religious fundamentalists, they are likely to turn away our growing constituency.

* One thing to keep in mind is that while atheists are Nones, not all Nones are atheists.  Atheists are a subset of Nones, so we don’t necessarily know what “atheists” answered.  More on this from Hemant later.

September 23, 2009
A Pathetic Response to FFRF's Memphis Challenge
Next Post