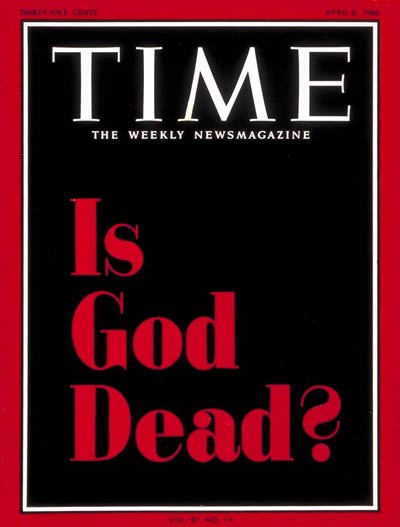 John T. Elson is the former religion editor for Time magazine who came up with that cover in 1966 — for the Easter issue.

He died a couple weeks ago at the age of 78.

The New York Times notes the significance of the cover:

The issue caused an uproar, equaled only by John Lennon’s offhand remark, published in a magazine for teenagers a few months later, that the Beatles were more popular than Jesus. The “Is God Dead?” issue gave Time its biggest newsstand sales in more than 20 years and elicited 3,500 letters to the editor, the most in its history to that point. It remains a signpost of the 1960s, testimony to the wrenching social changes transforming the United States.

“Secularization, science, urbanization — all have made it comparatively easy for the modern man to ask where God is and hard for the man of faith to give a convincing answer, even to himself,” Mr. Elson wrote.

It was a bold move then. And with so few major media outlets at the time, it influenced the national dialogue in a way that would be rare to see these days.

The release of Sam Harris‘ The End of Faith is the only other thing that comes to mind — it began a dialogue on atheism that still continues today.

Is that a fair comparison? Can you think of anything else that is equivalent in terms of impact?

September 22, 2009
Justice Antonin Scalia on Why We Don't Need Church/State Separation
Next Post