There are some lawsuits that could just as easily be decided on a coin toss and others that are so overwhelmingly one-sided that you wonder how the losers could’ve been so foolish in the first place.

Here’s a story that falls into the latter category.

GuideOne Mutual Insurance Company was offering a free service to people who bought their homeowners and renters insurance — a service that would offer “special benefits and discounts.”

It was called FaithGuard and it only applied to “churchgoers” and “people of faith.” The implication being, I suppose, that non-religious people would cause all sorts of problems…

That didn’t sit so well with one atheist, one agnostic, and the (non-profit) Lexington Fair Housing Council.

They sued a couple years ago and they won on Friday.

Under the settlement, the defendants [GuideOne] must pay a total of $29,500 to three victims of discrimination, an additional $45,000 to the government as a civil penalty and stop the alleged discriminatory practices.

The settlement also requires GuideOne to stop selling homeowners and renters insurance policies with the FaithGuard endorsement, train GuideOne insurance agents on their responsibilities under the Fair Housing Act and provide periodic reports to the Justice Department.

This sounds like an slam dunk case and the right side won.

Is it all over? I’m not sure. GuideOne still provides FaithGuard protection for auto insurance.

I don’t know if it’s at all similar to their homeowner/renter insurance, but check this out: 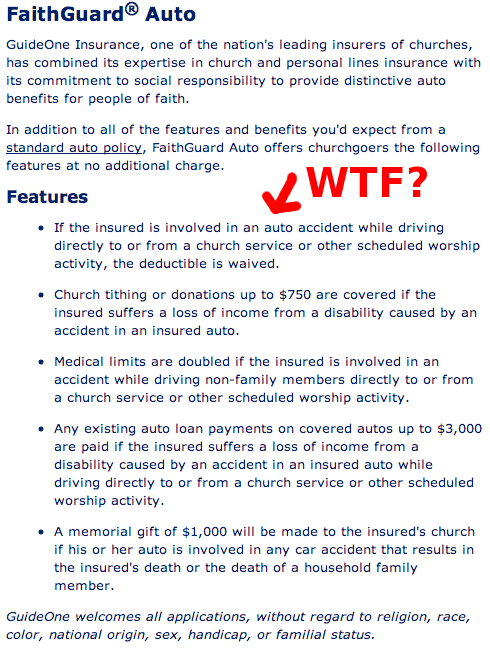 So if you’re driving to and from church, you’ll be covered in the event of an accident.

And if you get in an accident and can no longer earn a salary, they will cover your tithes!

Gotta love that fine print, too. GuideOne welcomes all applicants regardless of religion! Unless you have none. In which case, screw you.

(Thanks to Robert for the link!)

September 22, 2009
Atheists Stage a "Coming Out" March in Poland
Next Post