I’m sure many of you are familiar with those horrendous/disturbing/hilarious “Chick Tracts” – those, little cartoon tracts that express some of the most extreme Fundamentalist theology out there; e.g. Catholics aren’t really Christians and the Pope is the Anti-Christ, role-playing games are a recruiting tool for full blown witchcraft and Satan worship, “Christian” rock musicians have sold their soul to Lucifer, STDs are God’s punishment for having sex outside of marriage, etc. Even as a Christian it is usually pretty annoying/disturbing to read one, so I can only imagine how they must come across to atheists.

Maybe you’ve seen this one that deals with the End Times and the Rapture:

Well, an acquaintance of mine, the Irish postmodern writer/philosopher Pete Rollins just recently took this whole theme and created a parody version of a Chick Tract, but with a very different message. 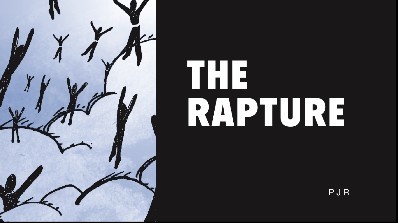 Unfortunately the whole tract is not up online yet (though you can see a few panels here), and currently the only way to get a copy is in person from Pete (which my wife managed to do this past weekend at a conference they were both speaking at). However Pete did post the basic text of it online and I’ve copied it below. Read it all the way through to get to the twist at the end.

Just as it was written by those prophets of old, the last days of the Earth overflowed with suffering and pain. In those dark days a huge pale horse rode through the Earth with Death upon its back and Hell in its wake. During this great tribulation the Earth was scorched with the fires of war, rivers ran red with blood, the soil withheld its fruit and disease descended like a mist. One by one all the nations of the Earth were brought to their knees.

Far from all the suffering, high up in the heavenly realm, God watched the events unfold with a heavy heart. An ominous silence had descended upon heaven as the angels witnessed the Earth being plunged into darkness and despair. But this could only continue for so long for, at the designated time, God stood upright, breathed deeply and addressed the angels,

“The time has now come for me to separate the sheep from the goats, the healthy wheat from the inedible chaff”

Having spoken these words God slowly turned to face the world and called forth to the church with a booming voice,

“Rise up and ascend to heaven all of you who have who have sought to escape the horrors of this world by sheltering beneath my wing. Come to me all who have turned from this suffering world by calling out ‘Lord, Lord'”.

In an instant millions where caught up in the clouds and ascended into the heavenly realm. Leaving the suffering world behind them.

Once this great rapture had taken place God paused for a moment and then addressed the angels, saying,

“It is done, I have separated the people born of my spirit from those who have turned from me. It is time now for us leave this place and take up residence in the Earth, for it is there that we shall find our people. The ones who would forsake heaven in order to embrace the earth. The few who would turn away from eternity itself to serve at the feet of a fragile, broken life that passes from existence in but an instant.”

And so it was that God and the heavenly host left that place to dwell among those who had rooted themselves upon the earth. Quietly supporting the ones who had forsaken God for the world and thus who bore the mark God. The few who had discovered heaven in the very act of forsaking it.

Just speaking personally, I love Pete’s twist on this traditional Fundamentalist doctrine, and the way he subtly points out how self-serving and uncompassionate it truly is. And I love the message that it is those who care more about the suffering and injustice in this world than they do about escaping it to be with God that are actually closest to God’s own heart (I, and I think Pete too, would say, in spite of whether one believes in that God or not). That reflects my own belief and what it means to me to still call myself a Christian.

Of course, I know that for the atheists here, Pete’s theology is probably still irrelevant to you (not believing in God in the first place and all 😉 ). However, I wanted to share this with you guys if only because I thought you might take encouragement from seeing at least one more progressive Christian standing up to and subverting the repulsive theology of the Fundamentalists in his own way (as I know many of you are often prodding more of us to do).

I also thought it might serve as inspiration for some of your own acts of subversion and resistance. How cool would an atheist Chick Tract be?! What might it be like? What would you include? And more importantly, would you be willing to pass it out on street corners or leave in lieu of tips at restaurants in order to spread the good news of atheism? 😉

(UPDATE: After I wrote that, I did a quick google search just to see if there were any atheist Chick tracts out there. I found this one.)

P.S. Speaking of the Rapture, apparently it was supposed to happen today. I guess I missed it. Can’t say I’m exactly surprised. 🙂