Jen just became a lawyer in Missouri, having passed the state’s Bar Exam. She attended her enrollment ceremony the other day but faced a dilemma.

She was told that all the new lawyers would recite an oath at the end of the event. It sounded harmless at the time. Once she received a copy of it, though, she was disturbed to see four little words at the end of it: 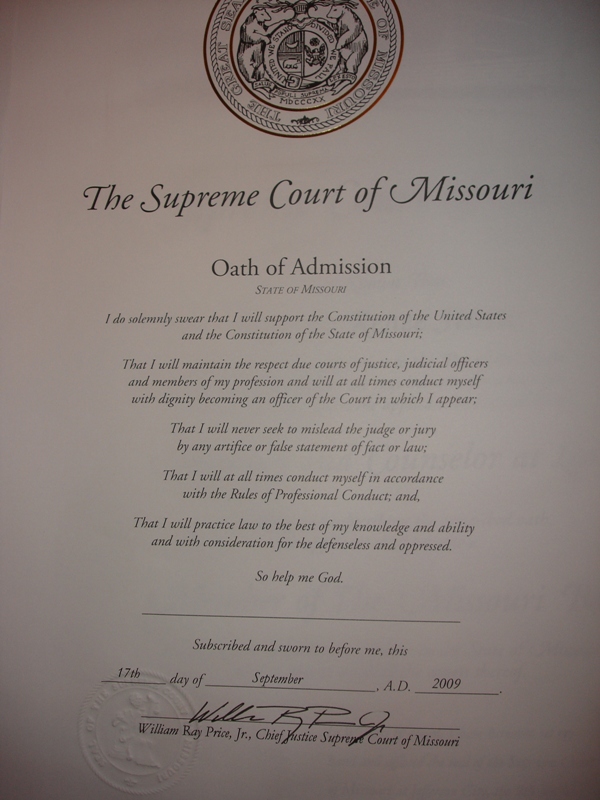 So help me God.

Jen didn’t want to say it.

I know this doesn’t sound like a big deal for theists, but I’m sure religious people wouldn’t feel right pledging an oath to Zeus. Similarly, we don’t want to have to make an oath to a non-existent god.

So what did Jen do?

The doors in the front of the court room opened, the clerk banged the gavel, and everyone stood. After a few comments and congratulations had been given by the Chief Justice and the President of the Board, the Chief Just asked all of the applicants to say the oath with him in unison. The knots in my stomach grew larger. As I began to speak the words that would mark the beginning of my career as an attorney, I suffered from mixed feelings of pride and uneasiness. What would happen if I said an alternative ending? Would the people around me look at me with scorn? Would my admittance be challenged because I had not said the oath in its entirety? Should I even change the last phrase at all? Or should I just suck it up and follow the masses on this one?

She chose an alternative ending.

It’s the same syllable count, but it has far more meaning to her. I think it’s great.

What would you have done in her position?

(Thanks to Jason for the link!)

September 19, 2009
Church Founder Kicked Out of Grocery Store For Not Removing Religious Hood
Next Post

September 19, 2009 The Holy Wars of Prayer
Browse Our Archives
What Are Your Thoughts?leave a comment