A new study published in the journal Reproductive Health shows that there is a correlation between a state’s religiosity and the teenage birth rate.

(And “new” study? Haven’t we heard this one before? Next thing you know, we’ll find out fire is hot.)

Anyway, the bigger question is whether there is causation. Does religion play a role in the increase in teen pregnancies? The study doesn’t say for sure.

But that isn’t stopping researchers from connecting the dots:

… study researcher Joseph Strayhorn of Drexel University College of Medicine and University of Pittsburgh offers a speculation of the most probable explanation: “We conjecture that religious communities in the U.S. are more successful in discouraging the use of contraception among their teenagers than they are in discouraging sexual intercourse itself.”

“It is possible that an anti-contraception attitude could be caused by religious cultures and that could exert its effect mainly on the non-religious individuals in the culture,” Strayhorn told LiveScience. But, he added, “We don’t know.”

Here’s a glimpse at the states, sorted by highest teen pregnancy rate: 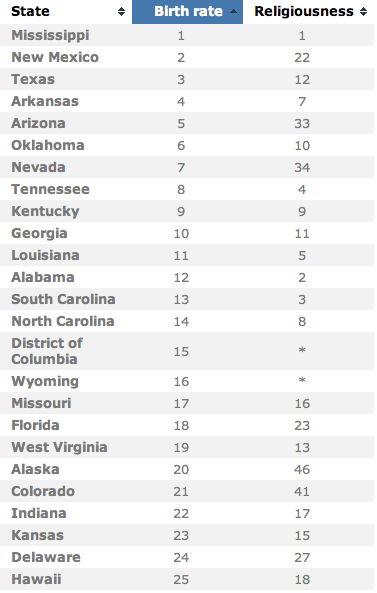 The rest of the chart can be found here.

I must say I’m highly disappointed that there’s no mention of Saddlebacking in the article.

So why does this happen?

And how will religious folks try to spin this information?

(Thanks to Benjamin for the link!)

September 17, 2009
Celebrate Ten Years of NOSHA in Louisiana
Next Post