A while back, Cherry Creek Public Schools began promoting “40 Developmental Assets” — a program that would help students become “responsible and confident young adults.”

One of those assets was Asset Number 19. It suggested “young adults spend one or more hours per week in activities in a religious institution.” 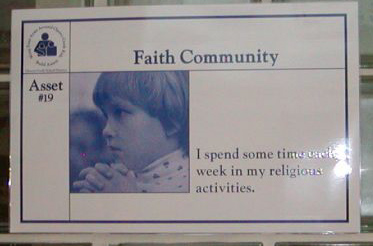 The Freedom From Religion Foundation filed a lawsuit on behalf of parents in the district.

The case lasted two years. It was finally settled this week.

The new wording for Asset Number 19?

“We would have preferred that the asset had been expunged entirely, because it’s not the business of a school to encourage students to spend an hour a week in a ‘faith-based’ pursuit. However, it’s probably a ‘first’ that a school district has ever encouraged students to spend an hour a week on pursuits including those that are ‘nonreligious,’ so we consider this a unique victory,” commented Foundation Co-President Annie Laurie Gaylor.

I’m glad the case settled the way it did. Other than getting rid of that asset altogether, it’s the best possible outcome. However, I’m wondering if it was really worth all this time, work, and hassle.

Should atheists fight these seemingly “minor” battles? Do they have a meaningful impact?

September 1, 2009 A Child Questions Noah's Ark
Browse Our Archives
What Are Your Thoughts?leave a comment