Bill Donohue and Me

Hemant has been urging me to tell this story, and with the recent mentions of Bill Donohue, it seems
like a good time to bring this up: 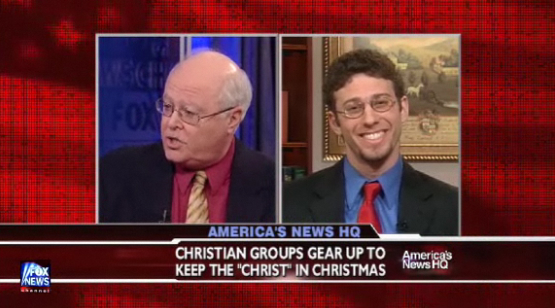 This happened was while I worked for the American Humanist Association, when we had put up the “controversial” bus ads stating “Why believe in a god?  Just be good for goodness’ sake.”  We got so much attention the next day that we had too many interview requests.  Our Communications Director Fred Edwords and our Executive Director Roy Speckhardt were already booked.

After I sat down at my desk, Fred came up to me and asked “Do you want to do a television interview on the bus ads?”  I stared at him stunned for a moment before telling him that yes, I WOULD like to do one of the interviews.  I started prepping myself with arguments and ideas.

About an hour later, Fred interrupted me to say “By the way, you’ll be on Fox News.”  I was a bit worried about it, but started prepping twice as hard.  After lunch – which I was too nervous to eat – I took metro home and got my suit.  Upon my return, Fred sprang the last update on me: I was to be on the show with Bill Donohue.

I was picked up in a limo and taken to the Fox headquarters in DC while the host and Mr. Donohue would be in NYC.  They put me in a small room with a chair and gave me an earpiece so I could hear the others.  Above the camera was a screen showing the NYC studio.  I was told to keep looking at the camera and not to look up at the screen – it would make me look shifty.  Besides, it would be turned off, they said.

Not so much.  It was on the whole time, tempting me to look up and see who I was talking to.  It was tough staring at a camera and only responding to talk in my ear.  I don’t know whether they did it on purpose – I try to give people the benefit of the doubt, even Fox news – but my acting experience helped me focus on the camera.

Bill was in his usual form, accusing humanists of butting in where we don’t belong, of being gutless, but my favorite part was when he compared me to a cannibal:

DONOHUE: Right. That’s right. They shouldn’t be profoundly ignorant, though. Sociology 101 says that morality has always been grounded in religion. They are trying to say, “No, it is grounded in individuals.”

Well, Jeffrey Dahmer had a conscience, too, Heather. And you know what? He destroyed his victims and then ate them. We saw what happened with militant secularism in the 20th century. Over 150 million dead because of this man’s philosophy — Pol Pot, Hitler, Mao and Stalin …

What could I do about that?  I laughed.  Anyone listening to that drivel would be lost to me.  I just reiterated that the message shouldn’t be controversial at all – we were merely saying that people should be good because we care about each other, not because a deity tells us to.  I stood up for our right to be involved in society, asserted that we care about others, and that he should too.

The reaction was, on the whole, good.  I got a lot of emails and phone calls after that, some telling me that they were praying for me, many telling me to get out of ‘their’ country.  But a good deal of them were positive, telling me that I was “more Christian” and more… well, sane than Donohue.  Commenters on Pharangula were divided about whether I should have refuted the cliche “Hitler” claim.  But I had neither the time nor the desire to get into that kind of back-and-forth.

When doing these kinds of appearances, it’s important to keep in mind the goal.  My goal was not to convince Bill Donohue.  It was to put forth a friendly face for humanists, defend the bus ads as noncontroversial, and make nontheists seem like a reasonable group.  And for that, I couldn’t have asked for a better person to be compared to.